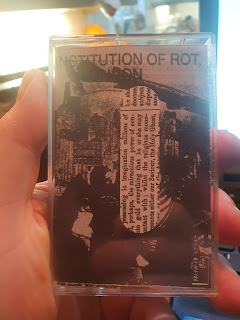 I’ve had a huge chip on my shoulder lately – I often do, but this is a long term one that really needs to be let out. I realised that cliques exist everywhere: in work, in everyday life and experimental sounds. Cliquiness breeds weakness. Don’t kid yourself that you are an outsider if you are part of noise/Power Electronics cliquery, I am tired of the shit show that social media acquaints me with. This blog now exists for those standalone projects and outsiders. I wish to continue to find the now without choking on the classics of the past and worshipping the biggest names mentality. Something that suits my continued approach arrived on my doorstep, it is an Institution of Rot tape by Richard Crow and Luke Jordan called Psychological Studies - Monomania.

Warbling suspenseful noise greets me as sound’s levels are toyed with so that the source is unrecognisable like a fading broadcast. The eventual eruption is beautiful as primitive noise chugs and splatters out at me. The impressive rawness is coupled with old radio samples that play out from mid-20th century, a time warp is formed as broadcasts and noise face each other off, the tension becomes transformative. The Voices across Psychological Studies are like ghosts in conversation, with noise backing and at other times eclipsing the ghostly dialogue. The focussed old-world use of the voice samples gives an early avant-garde quality. I know that crops up in other artists, here it has a definite, clearly defined purpose, it is as if the listener is flying through time across continents with interruptions of silence thrown in at different times.

I am impressed by the abrasive sound of Psychological studies through its’ primitive rawness and broken qualities. The crackle and rumble throughout Psychological Studies stops and starts in the earlier part of the album and seems to indicate new tracks. I also sense some tracks are also spliced together using this method sometimes with no space in between the changes. 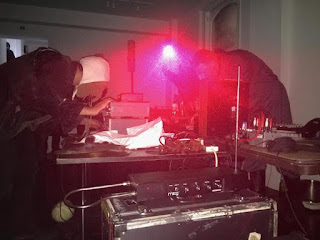 The use of noise intensifies to soaring levels as the tape progresses with the hostility radiating increasingly, things become a lot more structured and prolonged as the album progresses. This allows for good combinations of repetition and progression to happen alongside each other. The latter part of the tape demonstrates the sound and approach in its’ full flow with less conversations of voice as the noise really taking over– a definite shift in tactics.

I’d argue that the sound has a conceptual sophistication equal to that of French artists Entre Vifs and cOLIQue. The use of sound is evocative, transformative, and seemingly random but is actually very considered in its approach making Psychological Studies - Monomania a brilliant, effective work.