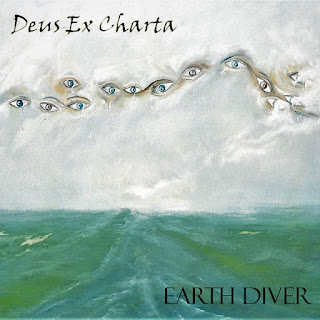 Sombre Soniks this month brings us another two new releases, both of which are side projects. The first of these is Deus Ex Charta, which is another incarnation of Serbian artist Timur Iskandarov, better known as Tamerlan. Here, the thesis and impetus behind the creation of this work is one that seems to be gaining ground in many quarters – the feeling that the way society has developed is inimical to humanity as a whole and that it’s failing both the people and the natural world it’s meant to protect. Add on to that conceptions of what ‘normality’ is defined as and its attendant strictures and regulations (whether legislated or otherwise) and slowly a large proportion of the Western world’s inhabitants are beginning to think that we must have gone wrong somewhere.

Indeed, if one looks back into our recent past, that feeling has always been there on the margins, and generally rejected by mainstream society. However, in the 21st century it appears to be breaking through those barriers and filtering through to the kinds of people who would never think of themselves as either rebels or protesters, leading them to opt out of ‘the rat race’ to live simpler, more satisfying lives away from the mad press of cities. And what Deus Ex Charta (which translates as ‘One Map’ –a particularly telling title if ever there was one) has done here is to simply boil down those feelings and intangibles of the whys and wherefores, and transposed them into a musical idiom.

Let’s start at the beginning with ‘Our Kind of Hell’, a chaotic mishmash of sounds and effects, none lasting more than a few seconds it appears, backed up by a constant but fractured beat. This is a pinpoint and accurate description of the state of civilisation in the 21st century – a turgid mass of endless communications, mobile phones, electronic devices, ninety-million channels on TV, the zombie-like hordes staring at screens all day, fast food, instant gratification, incels, 24hr media, mass travel, environment-disrupting industry, and our inane celebrity-worshipping culture. We’ve lost our connections to what’s actually important – the earth around us, people and community, the simpler facets of life. What we’ve created, in our inexorable march of ‘progress’, is indeed a species of Hell.

‘Thanatorgasm’ is our runaway consumption and embrace of this insipid and culturally-bankrupt culture, and doing so without batting an eyelid or thinking about consequences as long as it gives us a high. We’re faced with a high-pitched machine whine accompanied by rattles and a voice buried deep in the mix, but that voice doesn’t quite filter through, perhaps indicative of the lone voices of reason getting drowned out by the unheeding morass of humanity. It’s a thankless task trying to spread the truth to those who refuse to listen, or those who refuse to give up their toys.

The third track, ‘Earth Diver’, delineates what our response as a mature species should be – turn away, and look with new eyes at the bounties of nature, which are far more precious and less ephemeral than the trinkets that society tempts us with. Beginning with what sounds like a machine that’s been put out of commission, which is then superseded by a shining sustained guitar power-chord that sounds exactly like a horn announcing the coming of a new paradigm and dispensation, that the old is being replaced with a brand new relationship and understanding with Gaia. The sound rumbles on endlessly, its motion once started completely unstoppable, all the while building strength and power the longer it resounds. It’s a blanket of sound and energy, strong and wide enough to cover the entire world. It’s also transformative, just like a high tidal wave that cleanses the shoreline which leaves clean unblemished smooth sand once it’s retreated. There’s hope here in those soaring notes, and we should grab that hope, plant it, and watch it grow.

Sombre Soniks once again releases a thought-provoking set of music, one that perhaps is tinged with a certain urgency that impels action. I am continually astonished at P23’s ability to entice artists to produce such consistently high-quality work all the while releasing at least two downloads a month. But it also bears to be reminded that there’s a great deal of music out there by many obscure musicians who would be ignored by the mainstream taste arbiters of what we should be buying and listening to, and if not for the existence of such labels as Sombre Soniks this music would probably only remain circulated amongst friends and acquaintances. I suppose, then, that this is the supreme irony – the very machines of an errant society being used to disseminate the work of subversively creative and committed musicians who have essential things to say and shout about.