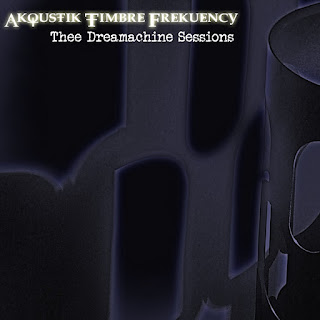 Ritual has always been around but, rather than being static, it’s an ever-evolving practise, even if its basis remains firmly embedded in the past. Brion Gysin added to the paraphernalia of ritual by creating the Dreamachine in the heady days of psychic and hallucinogenic experimentation way back in the optimistic (and mystic) sixties. Roundabout 1961 Gysin collaborated with Ian Somerville, a mathematician and computer scientist at Oxford University, and together they created the device. A description of the ‘machine’ and it effects are outside the scope of the present review, but information is plentiful on the web for the intrepid and curious.

The six tracks elucidated on here accompany a series of six short films on the device itself and Brion Gysin, its progenitor, plus an hour long mix which is to be used in conjunction with the Dreamachine. Akoustik Timbre Frekuency here rely on very traditional ritualistic sounds – bells, cymbals, singing bowls, flutes, harking back to the very roots of ritualistic practise. In addition field recordings have been thrown into the mix, creating a sensory dissonance as it enable us to see the world in a different light. Without the context of the films however it is difficult place the pieces into some kind of framework that makes sense. But, taking it purely as an academic exercise, and taking the hour-long mix as a reviewing cue, I will be concentrating my focus on that track so I can present some kind of an overview.

The aim of ritual, of course, is to release us from the physical and mental constraints of our mundane reality and call forth atavistic entities and manifest spiritual archetypes into being. It’s no exaggeration to say that what we’re presented with here not only achieves that, but practically throws us out of the normal and into the supernormal. And that’s just the music – if we wish to use the Dreamachine alongside it undoubtedly its effects will be more completely felt. Clearly, the limbic system, responsible in part for emotion, learning, and memory, is meant to be aroused and activated together with the excitation of our visual faculties, without or without the visual cues afforded by Gysin and Somerville’s device.

It’s actually quite remarkable the effect such stripped-back and ‘primitive’ music can have on the mind, its otherworldliness a passport to entry into a realm normally off-limits and hidden away from our senses. Also its ringing clarity clears the mind of all humdrum thoughts and images, propelling us into a dimension where everyday preoccupations play no part. Knowing this, and performed whilst meditating on the steadily flickering rhythms of the Dreamachine’s light pulses, access to the visual part of our brains (to say nothing of the deeply buried ancestral memories each of us carries within us) the efficacy of the machine can only be multiplied in manifold directions.

Saying that, having a Dreamachine isn’t compulsory – this is music to help us reconnect with ourselves, or at least those parts of ourselves that have been inhumed by the detritus of the world we live in. Listening to this, the psychic traveller can leave this dimension behind, bending time, place, and being at will. Sit back, turn the lights off, and simply let the sounds of time immemorial seep into every nook and cranny of your body. Your mind, once attuned, will do the rest. More than that, it will refresh one’s soul.