A3 Self Inflicted Decapitation.


B1 23 Shades of Decomposition. 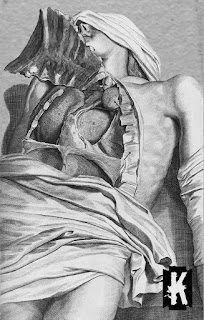 There seems to be a tendency of late to operate well within the lower frequencies within the current Power Electronics scene of late. Artists make entire albums of simmering broodiness, loaded with personal vague content whilst experimenting with restraint in the quieter depths of noise. When it’s done well (Shift, Stark, She Spread Sorrow) it’s truly, impressively great. However when it’s not done so well, it’s straight on the discogs for sale list to hopefully gain some financial compensation for what just happened to my ears.

Thankfully Kadaver seems unaware of this style and exists completely at the opposite end of the spectrum. I didn’t know what had hit me as Hypothermiasma began on the headphones with a complete hellish assault of screaming, rumbling noise. There is violent digital assault on Popcorpse, I’ve heard a lot of tedious techno assault noise of late, but this carves up harsh sounds and creates a rhythm through reassembled sounds put into a rhythmic pattern. Digital cut up used to impressive effect occurs several times across the album.

There are parts that appear to be harsh noise walls but are further violent assaults of sound with some good layering, particularly on Self Inflicted Decapitation.  Samples are used in several parts to build urgency before an attack of sound kicks in and they all link to each other well.

This is an album of experimentation that yields plenty of results, 23 Shades of Decomposition slows things down into a bizarre, warped sermon of decomposition. This track is then obscured by concise overlapping of harsh frequencies that allows parts of the sermon to glimpse through. Maruta continues this method, but is determined to outdo previous tracks where insanity and violence are concerned. It makes effective use of terrified screams, echoes, reduction and reintroduction of elements. The methods of experimentation do shift a lot, delivering a range of work that totally disallows any formula to take precedence.

I approached Kadaver thinking it would be one style of noise – as visually it seems to present as a straight Death Industrial project. It isn’t, there’s aspects of lots of things like laptop noise, Power Electronics, Industrial, American style Noise and Death Industrial amongst many, but they are all cleverly dismantled and put together as something else. I believe this to be complimented by a good shit filter and creative use of reassembly. It knows when to pull back, but manages to consistently keep things interesting. I am left curious, is the rest of the discography this good, is this album the best? I don’t know, but I am keen to find out more about Kadaver. This along with Stark’s ‘Hyena’ is my favourite release of 2017 so far.