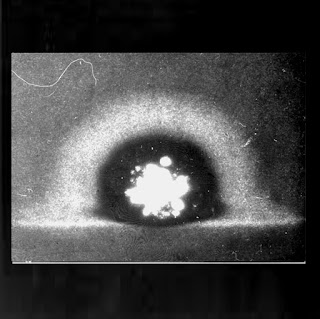 We shall find a transformative change ...into bestiality...

The machinery of torture stops... a devolutionary descent to primal state...

Quote from notes on the release.

I have followed the work of UK based Wolvestribe keenly now for a couple of years, this is one of their many recordings and their 3rd physical release that they have produced on Aaarrrg and sold through Destroy All Artifacts. The album’s numbered, 12 tracks are split into three sections – Creation, Destruction and Renewal.

The Creation section of Devolutionary Descent starts with an immediately, big and busy sound, this is a heavyweight sound formed through piercing echoes and big Death Drones that fill the sound. This really resonates massively, pulsating, and throbbing outwards. The violence intensifies in the second part of Creation, with sharper echoes creating a mass of violence that is a grid of sharp sound; this screeches and yells continuously. Creation III seems to pull back the sharpness and allow for massive passages of hum and distortion to really push the sound outwards as if to test the boundaries. As it hits overdrive, we seem to have reached the limits, Creation IV seems to give this breakthrough a structured form, holding the sound back, restraining it then releasing the tension as if to allow for controlled rises and explosions.

As we reach the Destruction, V seems to pull right back to allow the sound to grow and strengthen until you are hit by a mass of wall cut into by echoes and sharp noises. Despite the rises in intensity, there is a haunted quality running throughout Destruction. Brief pulsations form VI as low-level throbbing and distortion build VII until sharp electronic bursts erupt and leave devastation through the volume and brooding, mournful sound. As the regular rhythm of the pulsation shifts it creates intense changes of mood of the work. The sonic violence of Wolvestribe is now in full flow in the last part of the Destruction; VIII. This is eventually eroded and cut into as lead sounds are bled out leaving a fractured pulsating distortion until further roars of noise intrude and reinforce - there is no quiet death here.

Distorted ambient echoing is soon complimented by a deep sonic throb which is further complimented by blasts of distortion and screaming, I am soon lost in the huge scope of the sound - this is Renewal IX; X seems to just carry it on whilst intensifying the shouting. The vocal is woven in with the sharp noise which is effective at projecting it whilst complimenting the rest of the noise. Humming drones and wavering distortion play out for a long period of time – the distortion is like sheets of futuristic rain as the hum dies off. The storm threatens into the longest track on the album XI, this really builds landscapes of sound as things Renew themselves as the intensity increases. This is done by slowly raising the distortion, echoes and large rises in sound and buried vocals that emerge more as you focus in on the work. The space carved into the sound as elements disappear allows for the haunted moodiness of the work to shine through, this is until its inherent violence reappears. The violence builds the sound, it is forced to grow and evolve until it seems to go into overdrive and die. XII is as if that never happened, the Renewal is in full swing for the finale. Haunted electronics creak and shout over the mass od electronics that builds.

This album is an excellent Wolvestribe release, perhaps their best. It feels we are entering a new era in the UK of purposely mysterious, obscure PE projects that are ambitious in their creative scope, it is going elsewhere, it doesn’t play to traditional themes, it has its own politics, sometimes they are pointed inwards at the self, sometimes they are thrown outwards. This odd, new  underground is here, I feel Wolvestribe are amongst its highlights (Outsider Art, Knifedoutofexistence, Ordeal by Roses, Blackcloudsummoner, S.T.A.B, Stark, Invisible City Records, Harsh Noise London, Destroy All Artifacts, Tunnels of Ah, Satori, Slow Murder +). As I still mourn end of Iron Fist of the Sun and Unrest moving back deep into Europe, the end of Sutcliffe Judgend who had risen again, I failed to see the new beginnings of a new day, now its rays dazzle my eyes, clearing the mist to leave only the absolute clarity of the now.