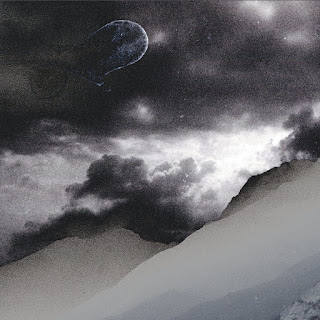 This album merges two sound artists who each have their own distinctive, differing styles. They are German Black Drone outfit [Bolt] and solo artist Biblo from Istanbul. On this 12” each artist created two tracks, one on their own and a second track featuring the other artist. This is a self-titled audio-visual collaboration that is complimented by a booklet of 8 manipulated photographs by Ole Kristian Heyer of the Italian glacial Lake Garda by. Due to the strongly differing styles this is an album that could go either way in terms of its’ success.

Bolt’s sound combines epic riffs, feedback that builds in complexity as instruments form suspenseful atmospheric drones that are unrecognizable yet effective in sound. They also incorporate dramatic shifts and drops in sound to creates epic, gorgeous results that really resonate with Heyer’s images. As bolts work shifts into a more subtle ambient territory it becomes expansive and ambitious. Biblo’s contribution to the work of [Bolt] is backed by beats that add a solid base for the sound to build upon. Static hiss playfully teases the ethereal ambience that [Bolt] evoke, creating a subtle repetitive shift between different sonic territories. The drama of the work truly reflects the impressive landscapes of Lake Garda and the wide contrasts between the townscape, lake and mountains. The two artists combine to make a hypnotic, evocative and ethereal passage of ever changing sound.

I’m completely unfamiliar with biblo’s work and the genre she operates in, but the changes she brings to [Bolt’s] work is massive. In a solo context her fractured electronica is pulsated by bursts of electronic beats that serve as an introduction to her abstracted vocalised sounds. Her work is dreamily ambient in contrast to the soaring seriousness of [Bolt], she also uses repetition well throughout her contributions. It is more of a long delicate soundscape of cloud-like floaty sounds and layered vocals. Combined with [Bolt] the electronics seem to intensify and take a more serious turn in sound. The music raises to higher ground with a more emotionally dramatic undertone.

In some ways, this album is fractured by being two artist tracks followed by two collaborations. They all really tie together by relating to Heyer’s visuals. The tracks that both artists work on together are stronger that the individual works; they deliver an impressive show of individual strengths that quickly become one complete unit. If both artists worked together again, I’d love to see a whole album of collaborative work with another core visual element. But these criticisms are only minor, this is an excellent record that reaches soaring heights as genres are mixed into unknown territories. 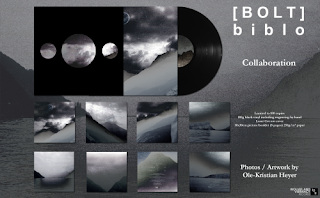