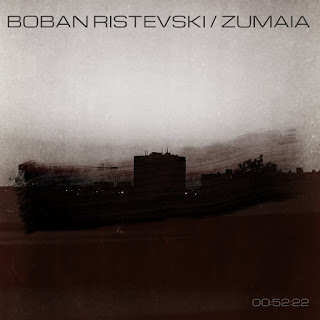 If desolation could be encapsulated in sound, then it would probably be this collaborative album from Macedonian Boba Ristevski and Zumaia from France, released a few days ago. Consisting of a single track cleverly titled after its running length, this begins with a blast of fetid winds blowing across an arid industrial landscape, buildings standing empty and ruinous, debris littering the concrete standings, and what vegetation that lives is sickly and only alive because it’s cowering behind walls and deeply sheltered recesses. Not only that, but the flora is joined by the remnants of the local fauna, mutated and twisted beyond recognition. A distorted, muffled voice emerges out of the blinding, dust- and rust-laden wind to speak or perhaps to warn: simultaneously a strange, insistent metallic ringing is heard from somewhere unidentified, the source obscured by that veil of dust and soil riding the air, its persistence and timbre setting the mind on edge, admonishing us to venture no closer. Perhaps it’s some manner of mechanism, somehow still operational but faulty, enacting its purpose out of programmed custom.

Everywhere we look we see devastation, physical and social. Society and civilisation have collapsed, whatever’s left of mankind has either fled to safer havens or reverted to a pre-industrial level of existence. The sky above, what we can make out of it, is yellow and jaundiced, a weak sun bravely attempting to pierce the thick suffocating cloud cover. Post-apocalyptic yes, but not necessarily nuclear-generated – given the present looming threats of unnaturally accelerated climatic change, perhaps what this is outlining for us is a picture of our future, one where all we took for granted is taken away from us.

Its deliberate lack of development and evolution points to a slow but inevitable degradation, a fading away into dissolution and disintegration. The wind dies down, leaving the voice and the ringing, until eventually the whole fades into just the lone ringing, quietly sounding out into an empty world. The two artists here have created something quite darkly mesmerising – a deeply black prognosis of the current path we’re taking. It’s bleak, austere, cold, gloomy, dark, polluted, and catastrophic, and is truly affecting.

Head over to Kalamine Record’s Bandcamp page to grab yourself a copy:
https://kalaminerecords.bandcamp.com/track/00-52-22