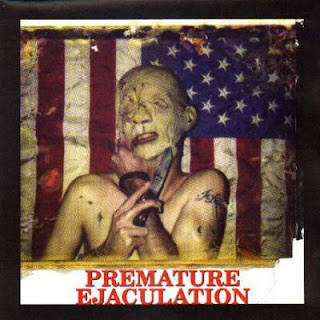 Talking about Premature Ejaculation, I’m often debating what is their best work. Many would argue it’s Death Cultures and the work of the Happiest Tapes on Earth era where Chuck Collison and Leo Wildes were also involved. All three members are each a separate, unique story to be told. There was also involvement in Premature Ejaculations history from Ryan Wildstar, Eric Christides, Paris Sadonis, Kris Fuller and Ron Athey, every member again has a rich, legendary creative past. Collison is the other main member of Premature Ejaculation, involved with most of their releases. He was the man that really gave depth and form to the overall sound – he improved things. In my eyes it’s the finale ‘Wound of Exit’ that is the best Premature Ejaculation work. It had input from Ryan Wildstar and Paris Sadonis, but oddly Collison was not involved.

Premature Ejaculation was the most prolific Rozz project, there were 21 known releases as well as many privately released cassettes by Rozz that are even more obscure than the Happiest Tapes on Earth releases. This album has had an odd marketplace fluctuation; for a long time around 10-8 years ago copies were rare going for around £40 when they popped up on eBay and for the last few years it has been easily available at around £10 with no reissues in 22 years since its original release in1998. I’d couple this release with the live Rozz album Accept the Gift of Sin that was recorded with David E. Williams; this was also released after the passing of Rozz.

There was an earlier recording Rozz did as Premature Ejaculation called ‘The Wound of Exit’; this was a privately released tape that wasn’t included in the Lost Recordings series. This continues the style of nightmarish passages of sound that the early recordings took. Rather than one journey, this takes the form of separate pieces like loops repeated to nauseating effect, samples of dialogue, torture and coughing warped into something beyond their original context.

Much of Premature Ejaculation’s recorded work was either crude noise, sampling or layered Dark Ambient soundscapes that functioned like long nightmares; Wound of Exit was a different approach completely. Each works 7 minutes shifts from use of urgent, repetitive, aggressive sounds to sampled records and bleak, murky noise. There are instrumental overlays such as moog synthesiser or guitar and funeral organ on the final track, this is the stand-alone album in the Premature Ejaculation discography, nothing else in there sounds like this one. Some of the Lost Recordings are primitive aggressive but Wound of Exit demonstrated a more accomplished aggression. Its lengthy nature and polished sound in my eyes make it one of the best Premature Ejaculation releases. It marks a clear change in direction for the project that shifted away from ambient nightmare soundscapes and a direct use of muddy, urgent noise and I feel that it is the wildcard amongst all of their albums.

The nature of the cover art is a polaroid photo by Cecilia A.Trevejo, it shows Williams in a deformed face mask holding a blade to his throat backed by an American Flag. The other polaroid’s show Williams in the mask, he chewed and adjusted these photos to suit his needs. The original images had a Swastika flag in the background, a frequent theme for Williams was to highlight the parallels between Nazi Germany and modern-day America.

Wound of Exit is an epic last album for Premature Ejaculation.