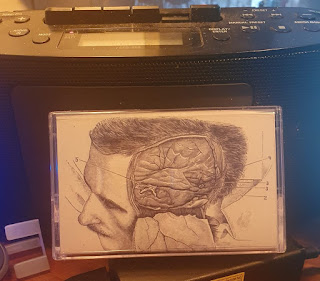 RJ Myato (active since around 2009, Pittsburgh) has an immediately haunted sound on Soporific Clang as it slowly comes to life. The sound is subtle with small interactions of muffled scraping and creaking with lots going off in the background. The sound makes me think distantly of New Blockaders or Small Cruel Party in that is about the communication that goes on between the sounds. The intensity builds up as high-pitched drones and whistles increase the pace of the Soporific Clang. I like the long die out of the sound as elements drop off the composition.

The build up of Soporific Clang serves as an intro to the more aggressive territory that Starvation Platter Cancel occupies. This uses relentless, assaultive drones as its’ main component, it sounds like several drones working together and alternating away slightly from the main pattern at times. This causes the movement in the sound as the slightest shift has an impact.

Insane guitar clatter makes Duet for Mailbox and Guitar. This is by far the biggest guitar noise battering that I have ever had. It isn’t bad at first, but it lacks the clarity and inventiveness of the two previous tracks. However, it is the noisiest track on the album and as it progresses seems to find a consistent language and direction.

Planet Shithead has been actively releasing since 2014 and I am immediately swarmed with static distortion, waves of it. It does have a good chop within its walls, it is slightly layered over to hide the chop within the static, but it is there. Subtle drones exist behind the main wall and there are small changes to the nature of the wall as it plays out, just intricate little details that are evident as you listen. I like this piece as it also seems to have changes in mood over its duration. The project does have a history of humorous titles and My Refrigerator Thinks I am Charming is no exception, however the work is good.

Good work from a couple of obscure projects, discovering this kind of work is a reward. This can be heard and purchased from the links above.