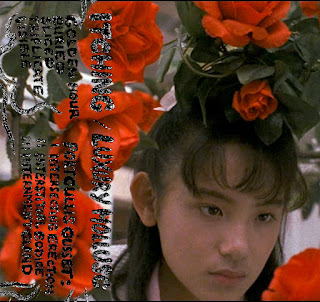 I confess to being a new listener to Dublin’s Luxury Mollusc, (active since 2006) only hearing bits on splits with other artists. Deep feedback terrorises my headset until clangs punctuate the drones, this is Intersecting Erection. Infected feedback begins to pierce the deep drones as it distorts seeming like bright sparks of light coming off a grinder. I did not expect it to be this assaultive, this is an interesting Harsh Noise display. There is a rich communication going on between the sounds, with a few elements at a time make more with less. The work eventually delves in creeped out, sophisticated atmospherics.

Deep bass heavy pulsations form Interstitial Bodice, sharper, explosive noises seem to go off over this, as if at war creating an unbearable tension within the work. This gets more taught as it progresses.  As the sharp noises die off for a time, the tension remains in the deep drones, it feels as if the artist is showing off by maintain the works intensity whilst stripping its’ elements down to the core. As the sounds rebuild, the sound is punishing as the sharper noise works like an electrically charged whip. I feel I as if I am floating in space while somebody takes an angle grinder to my head, this is relentless punishing noise.

Raging Harsh Noise cuts to drone and back again as Internment Glands begins to take shapes. This seems to out do the two previous tracks in terms of the ferocity of its attack, it keeps pulling back only to explode again in time. As the sound begins to fill out, water like sounds begin to cleanse it as holy chanting can be heard within the mass of noise. This truly is something else.

Itching was Nacht un Nebel, instead of Cello, Cat purrs are the sound source for Itching. This is also truly something else as Golden Hour begins, what sound like nice cat purrs intensify and go into Cat Stellar Overdrive and build into insane passages of sound that seem to explode into Harshness. This is warps sound to new further regions than Nacht did and I conceptually translate it as an amplified Cat Worship, an empowerment of the cat. This reaches a warped psychedelic harshness that I was not expecting.

Intense purring starts Buried off, this soon warps, distorts, and again goes into overdrive. What I thought would be a calmer project than Nacht und Nebel is using something else to create a harsher sound, the levels of warped are so screwy there’s something crazed about the work, which I like. Lovely purring again introduces Sliced until it goes off on further experimental tangents with the sound pushing at its’ limits furthering the range as much as it physically can.

Triplicate starts as the sweetest purr, less treated than the others, but accelerates to hyperdrive in no time. This also goes very Harsh; the purr becomes assaultive and choppy as if being hit by a helicopter blade repeatedly for fun. By saying this, I am not saying that is all the track is because as the intensity subsides it moves elsewhere to pleasant atmospheres - a kind of clicking trip. Visible concentrates on deepening the purr source before the distortion of it takes it elsewhere to become as severe as the Luxury Mollusc tracks.

I will say I love Nacht und Nebel, but this work is a serious step up. The Luxury Mollusc tracks are excellent too, this served as an excellent, proper introduction to both project’s work. This cassette is one of the best releases that I have heard this year. We are in a new golden age of noise in the UK, no shit!