A1. The Whistle is Blown.

A2. Sowing the Seeds of Victory (The War Garden).

B1. Where Does the Soul Come Out?

B2. Soldiers of the Soil. 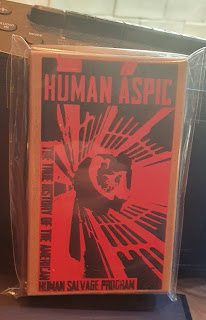 This is the first release by Human Aspic. The Whistle is Blown is a crunchy introduction to the tape, it has a fast shift, accelerating and changing constantly. It does combine several simple elements that chop and change violently to make a shifting busyness that works well and really holds the attention as the work acerates to its death.

The pace seems even faster as Sowing the Seeds of Victory (The War Garden) explodes into action. What becomes apparent is how individual elements are clearly defined in the work, so it isn’t just a dense wall of sound, there are rowdy, fast clashes between different noises. This is a shorter track than the opener that functions like a rush of adrenalin.

Restraint is temporarily demonstrated on Where Does the Soul Come Out? As the volume, crunch and sharper sounds rise it becomes apparent that this is a slower track that allows more space for sounds to operate within, a more effective dynamic that lets the sounds really work.

The sound seems to become a stutter as it repeats itself, trying to explode until it is successful, this is Soldiers of the Soil. This track is the choppiest of them all, taking off and being dragged back to minimal elements continually as if continually at war with itself. Like other tracks on the album, dialogue shifts at high speed between a few elements creating a sense of change whilst really relying on only a few elements that are continually moved around like pieces on a chess board.

The cassette comes with a huge back story regarding the Human Salvage Program and Human Originated Meat scandal during WW2. It is all revealed in a small booklet that comes with the cassette. The artwork on the card case is hand printed and looks beautiful. As Harsh Noise goes, this is an excellent debut release for Human Aspic.