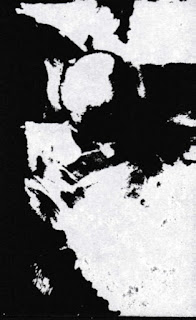 This is a mystery project on Modern Tapes by someone called J.P. I is in a limited edition of 15.

The Blood Flowed Faster begins with ambient drones that create a sense of dream. Noise begins in the background as if in the distance away from the main drones, these change to darker, increasingly prominent sounds. The Blood Flowed Faster is now a bigger, bleaker passage of work sounding like a tense nightmare that slowly unfolds. Once the first storm has passed, the sound pulls back to a distant horror awaiting in the distance. As the sound really begins to die down, it seems to become less nightmarish and slightly merrier, I almost feel glad the dark spell is over. That feeling doesn’t last long, the work rises with more attack via the pitch of its drones which is sustained until the songs end.

Blurring Not Blinding begins as a perfect continuation of The Blood Flowed Faster as it has that distanced ambient sound creating a dream that has not yet unfolded. This remains distanced for a longer period of time and feels as if singing bowls and cymbals were used in a subtle manner. Blurring Not Blinding has a beautiful resonance to it; there’s a darkness punctuated by a rich gorgeousness.

I’ll conclude this review by saying that I is a brilliant album with an intoxicating, immersive sound.

By Nevis Kretini at November 12, 2020
Email ThisBlogThis!Share to TwitterShare to FacebookShare to Pinterest
Labels: Closing, ModernTapes