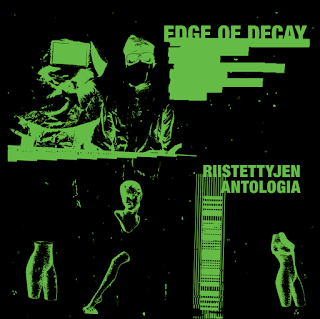 Edge of Decay are a (or another) heavyweight noise project from Finland, they have been actively releasing since 2012. They have released on Freak Animal Records, Obsessive Fundamental Realism and Bastard Culture. RIISTETTYJEN ANTOLOGIA is their latest album on German label Aussaat. The artwork and style of rounded jewel case are impressive and give a strong visual presentation to the work and as I am new to Edge of Decay, this sets a good standard.

Things start with an intense, crushing, infected, sound with quite a lot of chaos thrown into aspects of the sound. The sound seems to scream at times, it is difficult to tell if this is noise or vocals. When vocals do appear, they are woven into this texture and force the listener to focus in on what’s being shouted or if again, the sounds are playing tricks on you. The full sound is created from lots of individual gritty components which for the first part of the album, is presented as a thick collage of abrasive sonic texture.

At times later on in the album the sound either intensely throbs or drags, it is as if everything seems to work together to do this. When things are pulled down to the point of strangulation, various individual components can rise and this has a massive impact, it shows impressive sonic control and discipline. The break downs in themselves are impressive as the simmering produces some good passages of low-level noise that rise into broken displays of Power Electronics. The broken becomes more cohesive towards the end of the album as noise is formed into broken rhythms to make for impressive finale to the work. I also like how at times sounds push themselves into overdrive as if to accelerate tracks.

As a whole Edge of Decays latest album all ties in well together. This is a good album, I like the crunching and the broken aspects a lot, in contrast to that the early thick textures are great. My appreciation of RIISTETTYJEN ANTOLOGIA lies in lots of different things mentioned, which like the sound all comes together to make a fuller, more rounded like.