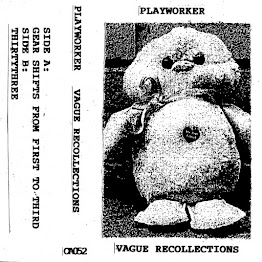 Playworker is a new UK project, a Knifedoutofexistence side project. Gear Shifts from First to Third is minimal, choppy, distorted radio like noise and what appears to be a vocal buried in the background. I like the static shift of this piece, very straight to the point and raw. This piece is impressive as it goes through distinct passages within the track as each collection of lead sounds shift to another.

Thirtythree uses a sharper palette of noise, choppier, more cutting in tone and texture. It breaks down to use a bass crunch in parts, this then adds pattern to the texture as you then have clear contrast. This makes some dramatic shifts in speed as if in overdrive and gains more echo to add more depth to the sound, this comes in as the sound begins to crumble.

Tracks within tracks, minimal, direct palette. This shouldn’t be a “side- project”, it needs continual growth and development for more magic to happen. This is an excellent, challenging release. 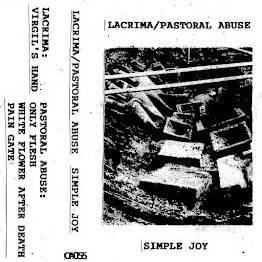 I’m new to Lacrima as heavy, haunted atmospherics lead Virgil’s Hand which quickly intensifies and gets noisy. Once this gets noisy, it has subtle rises in sound that increase the deliveries range. The sharper noises serve as a lead sound within Virgil’s Hand whilst the deeper sounds and distortion serve as a moving landscape in which the act unfolds, as it builds there is an increase of mania within the work. This is a good, solid barrage of Harsh Noise, the sounds are authoritative and controlled. I’d like to see how this solid delivery comes out in live performance. I like this.

I was very impressed by Pastoral Abuses – Cold Hand of Power Release on Invisible City Records recently so before I even play Simple Joy, I expect the highest standards. Straight away the sound is strangled and muffled as the fractured vocal bleeds through. The restraint continues with White Flower After Death, even more so. This is distant, low level noise that works well. Fractured, buried vocals return on Pain Gate, this rises slowly, as it does so the dialogue becomes more intriguing, you are pulled into what is happening. This is an impressive display of noise strangulation; the vocal display is very original and unique - the high standards have been met. 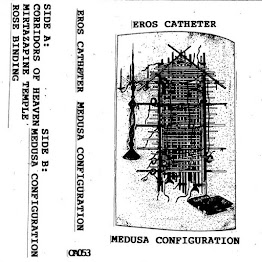 This one is remarkably interesting; I have just played this in the background, and I would say we have a serious player here. It is noise, but part esoteric in what comes out, mournful and bleak would also be appropriate terms. There are layered, textures of sound that reveal themselves. Some tracks have vocals treated to incoherency within the work, keyboards and synthesisers are used well. Beats eventually come into Rose Binding, which is the most noise track so far, buried vocals bleed out. Eros Catheter throws a few nods out to Coil on this tape, hence the esoteric. Medusa Configuration throws me some Power Electronics by letting the synthesizers radiate whilst ambient sounds and vocal noises occur. As it builds the use of noise becomes rhythmic and intense. This is a long instrumental display of the self.

Medusa Configuration is easily amongst the best releases I have heard so far this year.

Slow Murder – Death to Fascism, Freedom to the People. 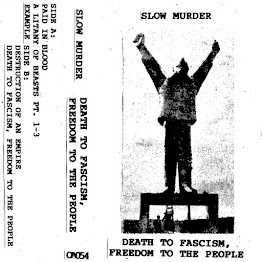 I’ve been more than impressed by the past work Wales act Slow Murder, they have made an impressive start and this tape does that, a sample of a record playing plays out until an intense display of Harsh Noise kicks in. I say this a lot about this batch, but again we have another high hitter, this is just brutal and massively relevant to the now, they screech impressive vocals and the displays of noise are sharp and harsh. Even when the actions are buried in murk they shine through. I really am taken by the vocals, they are impressively delivered. Like Lacrima I am keen to know, is it this good live, because it’s good. Ace release, Slow Murder is undoubtedly a top tier project.

This batch of tapes demonstrates we have brilliance a plenty in Noise in the UK, I am so happy I decided to throw my focus here.