Wolvestribe - The Politics of Survival 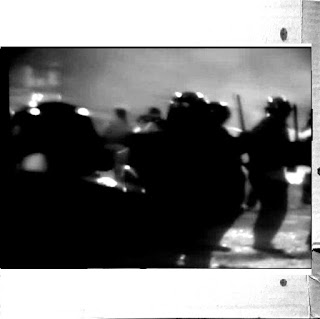 I’ve reviewed Wovestribe on the blog last year, it’s great to see complex, Politically, ecologically charged Power Electronics based in the UK. I feel we are hitting a new era of excellence here, with Wovestribe being one of the new leading lights in the UK. On this recording Wolvestribe are Kshaatath, Harry Westwood and Dr Strange Love. The Politics of Survival is Wolvestribe’s 5th official release.

Deceit uses ruthless repetition of electronic zapping sounds for noises and samples to use as a base to go off around. This really holds back and simmers as if building a landscape on which to base the album. As the sound faulters out lower level distortion and shouting builds up. Field recording of nature begin Consume, until a sharp blast of distorted noise takes precedent. The underlying bass roar wavers as does the lead distortion and noise whilst vocals are buried into the sound. This builds to a violent onslaught, Survival* takes the mantle and continues a violent electronic, digital assault. The work really finds its pace here and we have an excellent sound that is forward thinking Power Electronics. I like the buried Techno aspect, not ‘Beat Shit’, just there and it continues to the Techno-Rot finale which goes back to the same violent repetition that Deceit used. The distortion wavers into everything, the vocal shouts in like articulate blasts as the work changes frequency, breaks up and explodes in a continual cycle.

Wolvestribe is heavyweight, no doubt about that.