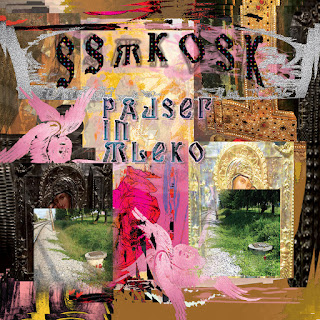 Little is known about the project SsmKOSK, I am guessing that SsmKOSK may be based in Slovenia as the label is. Pajser In Mleko is the sixth release by the project.

I like Pajser In Mleko’s immediate quirky experimental quality. At first you are hit by a bombast of the Breaks of noise that assault the listener, but the passages of instrumentation that are sometimes looped or played clean are impressive as they work in conjunction with the noise that populates the album. The crazed juxtapositions of the CD’s artwork reflect the nature of its sound.  Film/TV dialogue samples and voice samples form an ongoing abstract conversation throughout parts of the album.

In other areas vocal samples are allowed, the lead whilst being warped and tweaked as their dialogue plays out alongside classical guitar these moments of clarity and beauty are strong. Sometimes the classical guitar is cut into with sound treatments, yet it still shines through. The use of electronics is random and aggressive, when this is the sole element, I feel a gap in the sound is left as the combinations of instruments, samples, dialogue and electronics are where the project is at its most impressive. Saying this, dialogues cut up and mixed do work well.

The fluid, eclectic mass of tracks tie in well together through repeated elements of sound such as beats, cut-ups, noise, samples and instrumentation. The artwork compliments the sound, to make for a fun and quirky release. I do like eclectic projects like this that use a variety of sources and samples to make such bold experimental recordings. Check the link and see what you think, because I was won over.