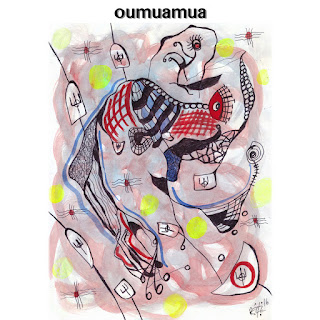 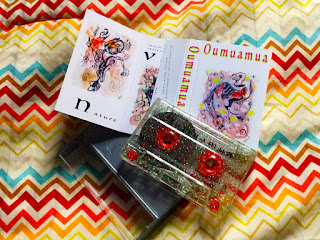 Both images are from the AlrealonBandCamp.

Named after a comet, in fact Oumuamua was the first object spotted by man to be moving through the solar system, so I begin to get why we are understanding ancient space travel.
This release on Alrealon, (a label based jointly in France, Switzerland and the USA) is adorned with amazing paintings by Robert L. Pepper. His paintings and other work can all be seen here. The artwork compliments the music well – as something starts to become recognisable, it becomes something else entirely - repeatedly.
The varied works on this compilation reach a certain sense of universal abstraction and in some cases, they are loosely psychedelic. To break this album down, track by track debunks it, I tried doing that and it smothered its beauty.
Ambient passages and some elements of noise in individual works as they begin to present themselves. There are periods of delicate, subtle electronica and raw experimentation of sounds and microphone crackling which make for platforms of which work takes off on its travel only to take a different course upon the next track as glaring sharp ambient drones build a suspenseful, haunted passage of journey that takes many different directions.
Timelessness is a word that comes into my mind a lot with this album, I have mentioned Ambient, Electronica and experimentation, but they are used in the context of loose terms as they are methods that can be pinpointed, yet there is a stylistically lack of commitment to many of the tracks. The theme of Space travel and the abstract nature of many of the works ties it all together whilst the mixture still breathes and flows as one – as this happens I feel myself travel across the decades, things eventually become blurred and I am caught in timelessness throughout the album.
There was one section where I thought I was caught in some epic Prog build up, but then the rhythms kept broke down and sounds started looping themselves – expectation was pointless as the mind is disorientated massively. There are some shamelessly retrospective sounds spot welded onto modern sounds and just when vocals appear, they are warped and treated beyond coherence - things are always kept to just the right level of unfocussed.
This is a great compilation, that flows perfectly through the furthest parts of the galaxy. I recommend this album to any listener. Good work.
Nevis Kretini 2020.