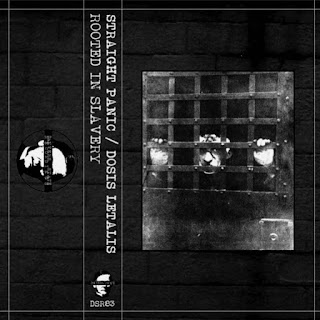 I’ve been a Straight Panic appreciator for a while now, it is time to start exploring the massive discography of this New Orleans based project that has been active since around 2014.

A slow beat is punctuated by noise and dream like drones, samples discuss slavery’s history and definitions, the levels of noise and drone shift around this. As the beat increases, the anxiety of the work intensifies - 13th Amendment serves as an ominous introduction to Rooted in Slavery.

The nastier side of Straight Panic appears for Industrial Plantation; the electronics are sharper, more cut into and the levels of urgency are massive. The vocal is trebly and cutting; as it builds the warbled rage kicks off bigtime – this is distorted and sharpened as it progresses, this cuts into the repetition of the rhythm and noises. The sound shifts and changes once the vocal has ended, this pulsates and eventually breaks down for samples to play out and do their work.

Samples and cut up, warbling noise work against each other. The slavery of prisoners as Fire Fighters is emphasized through documentary/news samples as the noise pulsates whilst radiating fear and panic. I have seen a lot of projects allow noise and news commentary to play off each other for long periods of time as if to present a picture of society at that time; it never stops being exciting and powerful.

Serbian project Dosis Letalis uses a sharp, trebly wall for Modern Day Slaves (Prison State), it’s sharpness of sound and repetition ties in with the Straight Panic tracks. As a wall, it has a consistent distorted blast of bass noise, but the sharp warbled noise works against this well, sounding like an electrical fault cutting across the entire sound. The few elements that are obvious and its rigidity make for a straight down the line, effective wall.

This is a strong split that serves as impressive social commentary on todays methods of modern slavery via the American Prison System and asking wider questions. The Straight Panic side of this recording is solid and Dosis Letalis demonstrates an impressive wall of sonic abuse, both works interlink well, making for an excellent album.