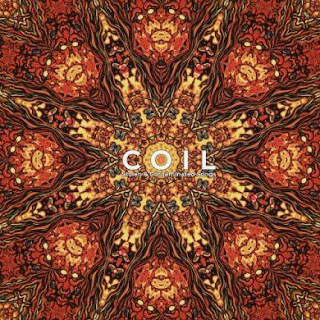 It wouldn’t be too much of an exaggeration to say that the band name Coil and the word ‘seminal’ are synonymous in many people’s eyes, including mine. I owe them a great debt of gratitude in introducing me to industrial and experimental music, along with Psychic TV, Current 93, and Nurse With Wound. The album under review, Stolen & Contaminated Songs, was originally released in 1992, showcasing outtakes and unreleased songs from the recording sessions for the album that would eventually culminate in the Love’s Secret Domain album. This is the first time it’s been issued on vinyl (see below) as well as in CD format.

What amazes me, 27 years after its release, is that the music still sounds relevant, refreshing, immediate, and up-to-date, even if there’s still something of a nineties vibe to it (which is no bad thing). Furthermore, the broad experimentalism that was a trademark of this project, ranging from the brightest of lights to the lowest depths of abyssal darknesses, is still very much in evidence, showing above all that Coil were never content in their musical musings and wanderings, refusing to let themselves be pigeonholed within any rigid definition of genre, culling influences and ideas from all and sundry. Boundaries, it appears, were things that Coil didn’t have much time for, and throughout their output they were always storming barricades and pushing into territories that lesser outfits would have feared to venture into.

Let’s dive in at the beginning, starting with ‘Futhur’, prefiguring ‘The Snow’ single (along with its numerous remixes, as seemed to be the fashion back then). Sounds, beats, and samples (including one from The Fast Show I think) trip, stutter, and cascade over each other with the appearance of chaos and randomicity, but yet ultimately cohering in the way only Jhonn Balance could engineer. The following track, ‘Original Chaostrophy’, has a tinge of the pastoral about it, at least in its initial stages (why does it remind me of Ralph Vaughan Williams?), although Coil then shift dimensions and create something unexpected. ‘Who’ll Tell’ is a spoken word effort, voice loops adding accents to the music in direct contrast to its mirror image ‘Who’ll Fall’, which appears several tracks hence.

‘Omlagus Garfungiloops’ sounds like something that Roald Dahl would come up with for one of his books, and in fact the looping voice at the beginning probably belongs in a Dahl tale. However, Coil then confound expectations by treating us to a laid-back, magical jazzy number, a warm summer night when the stars are right and the planets have all aligned. I can imagine those very same stars dripping from the sky and falling into oblivion. ‘Inkling’ attracts our attention next, a tumbling trill of tinkles accompanied by a deep drone, a shattering of delicate icicles turning into powder puffs in frigid air, precipitated by a stalking presence through a snowbound forest.

Next we’re treated to ‘Love’s Secret Domain’, a disturbed and disturbing treatise on when loves goes too far, and becomes obsessive and tainted with insanity and darkness, when it becomes twisted and, to most people, unhealthy. ‘Nasa-Arab’ comes in from a completely different angle, and is perhaps my favourite track so far, a strangely and alluringly distorted and treated voice imbued with flavours of the East, twists, swoops, and soars, leading into a sensuous and hypnotic rhythm that lulls as it simultaneously engages. It is at once elusive and allusive, bringing with it the exotic and tribalistic, the earthbound and the mystical. This is Coil at its most spiritual, freeing themselves and the listener from materialistic gravity in order to float off to etheric and Nirvanic bliss. ‘Who’ll Fall?’, the spiritual sibling of the earlier ‘Who’ll Tell?, changes emotional tack yet again, being another spoken word piece but this time featuring a lone voice, heard as if recorded on an answering machine, describing the suicide of a friend’s boyfriend against a backdrop of echoey and haunting guitar interspersed with old-style telephonic noises and blips, detailing the immediate emotions and thoughts that are bound to tumble through one’s mind on hearing such news. It’s affecting, getting right into one’s heart and soul.

Then we have some more dimension-twisting weirdness in the form of ‘The Original Wild Garlic Memory’, loops and strange utterances emanating from some alien mind, perhaps a new classical music beamed back to us from our own future. ‘Wrim Wram Wrom’ is a pulsing plane (as well as plain) of drone accompanied by blurts and fanfares. One can imagine ancient ruins dominating a vast plain of arid desert, the structures towering above all, commanding and leering, inviting yet threatening. ‘Corybantic Ennui’ (corybantic means frenzied, agitated, unrestrained), a short piece flavoured with a sense of an English pastoral idyll, again with a hint of Vaughan Williams (at least as far as a superficial appearance would suggest), before a rupturing and guttural growl disturbs the peace, a sign that all is not what it seems.

‘Her Friends the Wolves’ begins with a reprise of the growling from ‘Corybantic Ennui’, raising the hackles on the back of one’s neck in just the same way that being confronted by a wolf would do. In fact, as the track progresses the tempo lopes along as if we’re running with a pack, perhaps through that forest alluded to in ‘Inkiling’ above, only now it’s darkly shaded, with the moon only dimly shining, fleetingly and fitfully, through the canopy of branches high above our heads. Out from around the trunks and the obscure depths of the forest bizarre ghostly voices and snatches of sound emerge randomly, threatening and menacing, urging us onwards. The album ends on another short piece, ‘Light Shining Darkly’, sounding like angelic choirs as heard through a filter of spider-webs and poisonous breath.

Just like Cold Spring’s other recent ‘classic’ reissue (SPK’s Lamia Zehmanni: Songs of Byzantine Flowers – review forthcoming) Stolen & Contaminated Songs displays Jhonn Balance’s and Peter Christopherson’s musical virtuosity, especially important considering that the vast majority of music available at the time (and continuing on into the present day) had become increasingly manufactured and had shifted its focus from content to personality. Yes, I know it’s always been like that to some extent, but the emphasis appears to have become paramount. Here the accent is on music, and its ability to affect us on so many levels. It was revolutionary at the time and, all these decades later, can still hold its own. Whilst Horse Rotorvator will always be a benchmark for me on a personal level, this reissue also acts as a reminder that true artists evolve and innovate – two things of which Coil were the consummate practitioners.