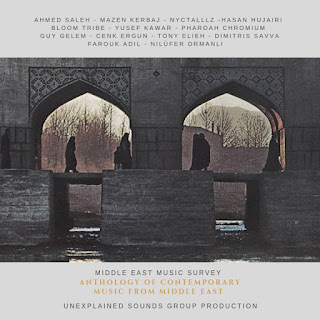 We tend to forget that music is an international and intercultural language, a means of communication that crosses boundaries and barriers. We also forget that maverick musicians exist in all countries, and that an underground scene thrives in places that often surprise us, but shouldn’t. Take Iran as an example: Western-style pop music is banned in that country because it’s considered unIslamic but, as Unexplained Sounds Group and Cold Spring’s co-release Visions of Darkness compilation CD of experimental music from Iran released some years back proved, there are those who will circumvent restrictions in whatever way they can. Human inventiveness refuses to be suppressed.

Joining that compilation is Unexplained Sounds Group’s Anthology of Contemporary Music from Middle East, but with a broader remit and scope. Musicians and projects from Egypt, Lebanon, Turkey, Bahrain, Kuwait, Iran, Israel, Iraq, Palestine, Jordan, Afghanistan, and Cyprus are represented here, covering a wide spectrum of styles and genres. It’s an eye-opening selection, conjuring up phantasmagorical visions of exotic worlds and faraway places that are normally only seen in the corner of one’s eye.

Apart from anything else, the cultural streams and markers extant within each country are still keenly felt and expressed within each individual piece, even if the concepts and frameworks are uniquely transmogrified into warps and wefts of fractal complexity and technicolour saturation. More than that this musical freedom, without the constraints imposed by strict definitions of genre, means that the musicians are free to explore fresh avenues and panoramas that perhaps in other countries and cultures has been concretised to a much greater extent.

The appeal of the exotic is alluring, to be sure, but I can honestly say that every composition on this compilation held my attention, a rarity for any anthology I think. It’s the sheer spectrum of expression that impresses me, ranging from pieces that are heavily tinged with traditional modes right up to noise and experimentalism. Ahmed Saleh’s ‘Feryal’ voice-loop opening on the first track is lulling, because it feels like the beginning of some dance track but it never quite breaks, instead piling on more voice loops describing distant, fabulous architectures of the mind and imagination. Naujawanan Baidar’s piece is eminently reminiscent of Philip Glass with its minimalist repetition of a two-note horn-blast, over which writhe interjections and punctuations. Overall its atmosphere conjures up visions of vast armies marching across dusty desert sands and impenetrable mountain ranges.

Bloom Tribe bring us shimmering sirens and alarms hitched up to jerky rhythms on ‘Desendence’, before descending strings fall and disintegrate into the dust of ages. Cenk Ergün’s ‘Bir’ is the most experimental so far, its stacked rhythms all competing against each for dominance, a fractured canvas perhaps indicative of the fractious history of the region. Hasan Hujairi’s ‘Prelude for Orpheus’ is the most obviously eastern in flavour, a melody played on a traditional stringed instrument built upon a carpet of minor drones, before descending into atonality and chaos in exactly the same way that Orpheus’ decent into the Underworld did. Nilüfer Ormali’s harmonic voice refrain of ‘Art of Dying’ soon breaks into sub-bass drones and ringing gong, a fine depiction of the mysterious east, and is at once exotic yet unsettling, occult yet open and inviting.

Pharaoh Chromium’s ‘Requiem for Palestine’ is perhaps one of my favourite tracks on here so far, a juggernaut of sirens, voices, and drones, set against a magnificent rhythmic helicoptering backdrop. Given its title and that chopping sound, it’s ultimately difficult to avoid the political overtones inherent in this piece: I won’t dwell on the whys and wherefores, instead restricting myself by saying that this is a very powerful piece that stays long in the mind and hits home. In complete contrast is Ahmed Saleh’s second piece, ‘Khitam’, a lilting ambient composition based around a flowing keyboard phrase and rhythmical drone notes, resulting in an uplifting and soaring instrumental that somehow reminds me of Cluster’s work.

‘Parallels’ by Guy Gelem is again a composition utilising a traditional bowed instrument wailing mournfully over a drone and percussion backbone. An incensed-filled room, guests leaning on cushions around its perimeter, and a dancer with musicians entertaining them. This is about as exotic and traditional as you get on this album, unlike the following track, Tony Elieh’s juddery, staccato ‘The Dark that Matters’, which jumps and glitches, stutters and sputters, creating a fragmented picture of the region and its insecurities. ‘Surface Crack’ starts off traditionally enough, a reverberant flute solo, but then it almost enters noise/drone territory, the sounds curling in upon themselves and producing disturbed currents, like airflow over a slabby structure. A sound akin to water flooding through a constricted pipe introduces Mazen Kerbaj’s ‘The Acoustic Synthesiser’ and yes, it does sound electronic but is indisputably acoustic in origin – a very clever piece.

On the final stretch now, with four more entries to go. The first of those is Yusef Kawar’s ‘Nerves’, a teeth- and bone-grinding two minutes of mechanical/electronic noise. Just the thing to clear those brain cobwebs away. Dimitris Savva’s soothing dronescape, accompanied by lapping waves, tubular bells, and ringing tones, restores equilibrium and balance, bringing with it fabled oases and storied minarets to mind: but it also delineates its counterpart, the dark, smoky temples, and secret grottoes in hidden valleys beyond the reach of most. Then again, you may be in need of some nihilistic, misanthropic noise, and Nyctalliz will be only too happy to oblige you. ‘The Humanity Demise’ is just that, a concatenation of high-pitched noises and deep bass rumblings, essaying a crumbling and tumbling landscape in which humanity is crushed. Cenk Ergün’s closer ‘Amsterdam’ is an odd one, atonal, jumpy, unfocused, freeform but somehow still exuberant, and probably very descriptive of the Dutch city itself.

If, like me, your knowledge of experimental music is restricted to Western-based outfits and projects (with maybe a few Chinese and Japanese acts thrown in) then this compilation will help to introduce you to some cultural mavericks that are breaking boundaries in their own areas of the Middle Eastern world. This selection is more fluid in some respects, because the artists are to some extent still finding their way, and the scenes are still evolving and developing. In time, even more startling revelations will emerge from countries whose music we normally slot conveniently into the ‘world music’ pigeonhole, and show us that music is far more vital and vibrant all over the world than we think.

Available as a CD (limited to 200) + download via Bandcamp at the link below:
https://unexplainedsoundsgroup.bandcamp.com/album/anthology-of-contemporary-music-from-middle-east

By Nevis Kretini at September 08, 2019
Email ThisBlogThis!Share to TwitterShare to FacebookShare to Pinterest
Labels: Anthology of Contemporary Music from Middle East, Various

A lot of good analysis and superb ideas here. It is fascinating as the music it talks about