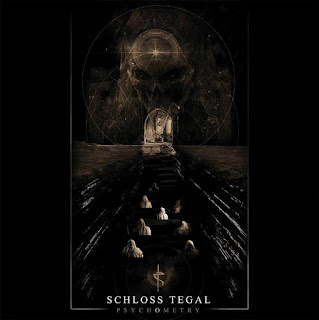 Normally, when we use the word ‘haunted’ as a descriptor it often applies to a place like a house or a mansion. In the case of Czech outfit Schloss Tegal, and which is especially apparent on this, their latest LP release, ‘haunted’ feels as if it refers not to a physical thing, but to an inner state of mind. It’s a deep dive into an interior world where everything is out of balance, where madness and neurosis have physically manifested, and malign atavistic entities have infiltrated the deepest parts of the consciousness and subverted the normal processes of mental cognition to affect behavioural patterns.

We all live in fear, to one degree or another, of one day becoming lost to ourselves, or losing any kind of connection to the ‘real’ world. The veil separating madness and sanity is thin, and here it appears that that veil has become even more insubstantial, as if a mere touch of a metaphorical finger will tear it down. Using the edged weapons of sustained blankets of bass graininess and rumblings, frigid far off whistlings and deceptively quiet winds blowing from distant mountains and ridges (and which are sometimes accompanied by strangely distorted utterings that appear to emerge from some other dimension), Schloss Tegal set the unsettlement meter reading to 11 – it’s a deeply dark, alien, and desolate environment, a perfect place for paranoia, anxiety, and psychosis to be seeded and take root. It’s inhabited by entities inimical to sanity and order, to reason and logic, and their only purpose is to bend perceptions toward a world seen through a dark prism.

Terror does not need to broadcast itself loudly; all it has to do is to find a way to get under your skin and bury itself deep within, by deception if necessary. That’s exactly what Psychometry does: superficially at least, these sometimes gentle swathes of sound lull one into a false sense of equilibrium, only for an unsettling industrial grind to emerge out of the blizzard and drill into the skin and thence to our consciousness. This isn’t just noise for noise’s sake; this is narrative through sonic manipulation, twisting perceptions and expectations as its hold becomes deeper and stronger. It takes us to places most of us fear to tread or at the very least try not to think about. And, despite the negative connotations I have gleaned from listening to it, it’s a magnificent and beautiful record, one that deserves to be in every dark ambient fan’s collection.

Best listened to on headphones.