Anemone Tube, Jarl & Monocube - The Hunters in the Snow – A Contemplation on Pieter Breugel’s Series of the Seasons. 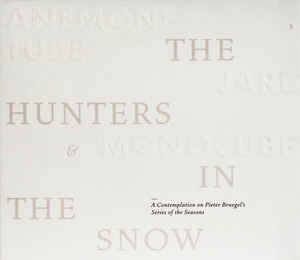 Let’s be honest – it’s quite a brave move to base a work around a very famous set of paintings, but then Pieter Breugel the Elder (c. 1525-1530 – 9th September 1569) was a very singular artist in his day. His work often depicted the everyday lives of ordinary people and his series documenting the seasons from early spring to winter in five (originally six) canvases show peasants going about their daily lives, in a way that we’ve lost touch with in our post-mechanisation world. Over the course of more than five years Anemone Tube, Jarl, and Monocube crafted a distinct set of pieces, each reflecting the gradual progress of the seasons.

Spring is a time of renewal, a harbinger of better things to come, of brighter, warmer, and longer days. However, in early spring, winter is still dragging its heels, unwilling to let go completely until it has no choice, and in our first track (and painting), ‘The Gloomy Day’ (Anemone Tube & Jarl) (early spring), the coldest season loiters around still, a dark promise that it will return. Scintillating droplets of tinkling bells gently fall like miniature stars from a cloud-laden sky, coming to an ephemeral rest on ground that is already bursting with potential and new life, signalling that spring will not be denied its allotted time. It’s also a message to everything and everyone, quickening pulses and gladdening hearts.

Life wakes and scrabbles for light in the next in the series, Jarl & Anemone Tube’s ‘The Hay Harvest’ (early summer). Soft burbling bubbles up from below to break the crusty surface, its echoes reaching far and wide like a propagating wave, alerting other dormant life, including that of humans, to shake off winter’s grip, and to ride upon the warmer rays of the sun and to rejoice in the first signs of the new green shoots. It’s a shimmering hallelujah, a surge of renewed energy, and a dance of joy.

Anemone Tube & Monocube bring us the report from late summer, ‘The Harvesters’: summer is nearly reaching its apotheosis, and its bounties will soon be ready to drop or be reaped. This is the time when Mother Earth is at her finest, in spite of nurturing the next generation, but there’s a hint that this stage will be brief – autumn is approaching, the winds get colder and sharper. A wave lapping upon a shore and an inhaling and exhaling buzzing wafts upon drones and whispering winds, a prompt reminding us that already the transformation has begun. Cold whistles and whines swirl and roil, bringing with them the aromas of the new season just around the corner. And then, before one knows it, autumn has arrived, and ‘The Return of the Herd’ (a solo effort by Anemone Tube) announces its ascendance in crashing waves, keening fanfares, and mournful washes. The world changes quickly now, heading towards the time of the Great Sleep, and the pulse of life slows and nature sheds her fineries.

‘The Hunters in the Snow’, a collaborative work between all three artists, crashes in with a sense of urgency thrilling through its densely droning pulsations. It’s the leanest of the four seasons, when resources are scarce and nature can be harsh and unyielding. It’s a confrontation between nature’s reticence, and necessity and survival. This isn’t a season suited for the weak, but it’s also a season where its lack of abundance pushes the instincts of the individual and the community alike. In spite of the bleak prognosis, passages of string-like chords hint that it’s possible to not only survive but flourish despite inclemency. And it’s in the second half of the track (the longest one on the album) that there’s the promise of renewal, when the life-giving warmth of the sun will come once again, and Mother Nature will wake up and bestow her plenitude upon us once more.

This is a collection of compositions inviting us to meditate on the vitality of each of the seasons, to feel the changes as one morphs into the one following, and to perhaps match the beats of the earth’s pulse as we live through each one. In some ways it’s asking us to return to a time when the seasons ruled our daily lives, when we noticed their rhythms much more keenly and thereby appreciated them more. The Hunters in the Snow is a finely tuned album which, oddly, I think should be played on a cold winter’s evening in front of a roaring fire.

Available as a limited edition CD of 333 copies in 8-panel digifile with embossed cover printed on high quality natural paper, accompanied by a booklet which includes an essay on Pieter Breugel’s landscapes by Sven Schlijper-Karassenberg and Kim Dohlich, as well as a poem by Jean Gebser.

Purchase at the link below:
https://aufabwegen.bandcamp.com/album/the-hunters-in-the-snow