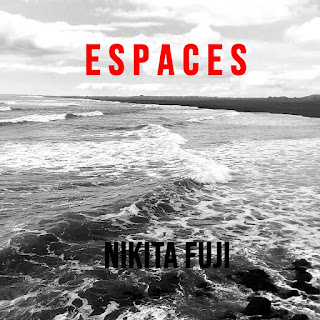 It’s a brave person who decides to base a conceptual ambient album around a work composed by one of the masters of 20th century minimalism, and even braver when that work is one of Estonian composer Arvo Pärt’s works, in this case ‘Fratres’. The original is itself a sublime work, a masterpiece combining the simple with the seemingly complex, so to even contemplate the act of taking a part of it and expanding on its sublimity is astounding.

I’ll be honest – I am not much for classical instrumentation and music. I find classical music too intrusive, too much of an imposition on my aural reality. I am not saying that it’s bad, just that I don’t understand it and my brain can’t process it in the same way that I do with dark ambient.

This is a roundabout way of saying that Fuji’s interpretation, even if it’s only a slice of the original and so taken out of context, feels transcendent in a way that Pärt’s work doesn’t. There again, they’re two completely different beasts, and like I averred above my preferences are nothing to do with the quality of the original – this is merely how *I* respond to it. Espaces is essentially one track divided into six parts but ultimately the divisions are meaningless – taken as a whole this album can be interpreted as a journey through the cold, lightless regions of the earth, places where the sun hides its face for months at a time and, even when it does shine, the temperature declines to rise much above freezing. Frigid winds blowing is the only form of movement here, and they carry with them the icy dust of ages and eons, obliterating and obscuring the landscape, making features barely perceptible or even recognisable. In those times when the microscopic particles cease their turbulence and settle, the wind lessens, and the skies clear, movement doesn’t entirely desist: look up and we see the dance of even tinier particles shimmer across the dome of the heavens. Behind the veil stars twinkle frostily, their light as pure and unalloyed as we are likely to see.

This is serene and beautiful, but it also carries the seeds of darkness within it. In spite of how peaceful and tranquil it may appear, for the most part that’s only a superficial thing. Snow and ice, especially when sculpted by natural forces, can look spectacular, but cold can also bring death. Regardless of how fine and uplifting this music sounds and feels, that potentially lethal element lurks behind every note here. The glacial elegance portrayed here is alluring, enticing, but it’s perhaps fortunate that we are experiencing it from afar, at many removes. This is definitely a thing of beauty, but it comes with sharp edges.

Support this new label by going here to purchase your copy of this digital only album:
https://hannahmusic.bandcamp.com/album/espaces