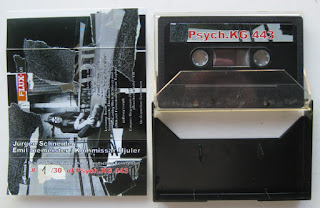 I believe Lesung Aus Jürgen Schneiders is a live recording in a guesthouse in Cork, Ireland. Dialogue plays. The voice is Schneider boldly reading text aloud, I believe the voice is doubled or treated with effects slightly, it is then joined by a female voice ‘Irene Murphy’, both voices dance around each other. Murphy’s voice is soft and clear, Schneider’s is urgent the contrast is obvious.  Because I can’t understand the German dialogue, this makes it exciting and as the sounds and tinkering become more frequent, it’s avant-garde qualities shine through. As they dominate later in the work, it becomes uncomfortable through the tension it builds, the voice raises prominence again and is more warped – the tension continues to grow. I like this, it seems old world.  Sounds come from Soft Day and the Quiet Club, they are random and comedic, building tension and disrupting like a naughty child at random intervals. The voices are pushed to the background and the noises and sounds take over the atmosphere becomes intense; the sound poetry really becomes prominent. The female voice then leads, and the work becomes darker.

Kommissar Hjuler cuts up a Joseph Beuys speech to make ‘JoBeuysseph’, it’s a good kick of humour after the lengthy first performance. The first side of this tape is insane.

Emil Siemeister’s distant clanging begins, scraping and plucking sounds accompany this. The work is of a slower pace and more distant than the Fluxus Reminds Me… tape. The aggression and prominence of the metal work grows as the piece develops. An odd voice sounds take lead, making a warped yet mournful melody – this has changed into a vocal piece, with the odd clatter existing in the background.

Delicate tinkering begins, bells and metal tinker repeatedly, sometimes gaining rhythm until other metal clanks join in. this is quieter and chattier as a work, the sonics shift around as different sounds communicate with each other. Kommissar Hjuler’s ‘Ur-Gamelan-Szechuan’ parallels yet simultaneously contrasts Emil Siemeister’s work.

Experimental work at it’s most challenging.

By Nevis Kretini at July 10, 2019
Email ThisBlogThis!Share to TwitterShare to FacebookShare to Pinterest