Tracklist:
1. Messenger from the Galactic Core
2. Dark Matter
3. The Void
4. Ultimate Fate of the Universe 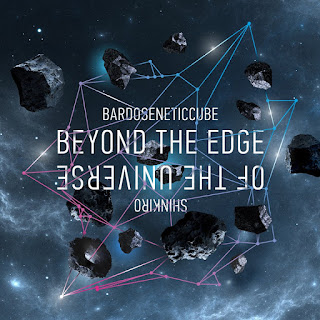 Here we have four lengthy pieces of cosmic dark ambient that comfortably stretch across a canvas as broad and as deep as the universe itself. It amazes me at times how a species as planet-bound as homo sapiens can create such vivid, painterly, and sculptural depictions in sound of environments none of us have ever seen up close, and which we are unlikely ever to visit. I am disinclined to believe in astral projection but music like this makes me question my assumptions about that – how else to explain such mind-numbingly expansive and dramatic vistas of dark beauty as detailed here?

I cannot imagine a place more breathtaking, electrifying, or terrifying than the galactic core of the Milky Way. A nexus of out-of-control gravity culminating in a supermassive black hole, where stars orbit around it at speeds barely comprehendible, where matter and light are swallowed and spewed out violently at thousands of miles a second. The sheer ferocity is itself a grandiose and ineffable spectacle, worthy of our awe and dread in equal amounts. The opening track thankfully lets us observe the unfolding events from a safe distance, the slow dance outlined in sustained chords in major and minor keys that ring out across the inestimable distances whilst being accompanied by stretched-out bell-like tones. Even from here though, the pull of the forces at work is strong enough to be felt, giving us a tiny but exhilarating taste of what it’s like to be insignificant.  It is both inspiring and hideously alarming.

We’re in even more mysterious territory in ‘Dark Matter’, that hidden and puzzling gravitational force shepherding the observable matter in our universe. Looping mutterings and grumblings form its backdrop, with exclamations of sparkling crackles punctuating it in random bursts; the very components of the invisible fabric holding reality together, unseen and unfelt but essential. Fading in gradually the voice of the universe asserts itself, eventually breaking and crashing upon the shores of matter, sparking chaos and creation, and magnificent spectacle. It almost overwhelms but pulls back before everything fatally breaks apart.

Now we’re confronted by ‘The Void’ – a place of unutterable emptiness (for fact fans, there is actually a real void in space, called The Great Nothing or the Boőtes Void, where there are very few galaxies and is mostly unoccupied space). Bass gratings and bursts of metallic percussion fight through swelling chords, a clash between chaos and orderliness. This inevitably leads us into ‘The Ultimate Fate of the Universe’, something which none of us wish to contemplate let alone being capable of imagining. A state where matter loses its cohesion and loses out to the irresistible force of immense gravity, coalescing into the very infinitesimally-small singularity the universe began as. This final track is a lament for all that was and is now passing beyond the call of anyone’s memory. From darkness it was birthed, and into darkness it falls once again.

‘Beyond the Edge of the Universe’ makes me want to buy a sensory-isolation tank and dissolve into non-being whilst listening to and experiencing this. Strangely enough, in spite of the destructive powers that lie behind the creation and continuance of the universe and their portrayal here, I find it all somehow comforting. Not entirely sure whether that makes me a grumpy nihilistic crank but it suits me just fine.

Available from Zhelezobeton’s Bandcamp in digital format (https://zhelezobeton.bandcamp.com/album/beyond-the-edge-of-the-universe ) and also available in a limited factory-pressed CD in 4-panel digipak in an edition of 300 plus a limited edition tape of 50 with fold-out inner card and download code.

By Nevis Kretini at July 13, 2019
Email ThisBlogThis!Share to TwitterShare to FacebookShare to Pinterest
Labels: Bardoseneticcube & Shinkiro, Beyond the Edge of the Universe, dark ambient, Experimental, Zhelezobeton