I Opened Your Eyes.
Now I Have to Close them.

"Death des sometimes seem like a solution that dissolves emptiness. But noise always lures us back into it. And mumbles of rebellion seem to slip into cramps of fear. .." 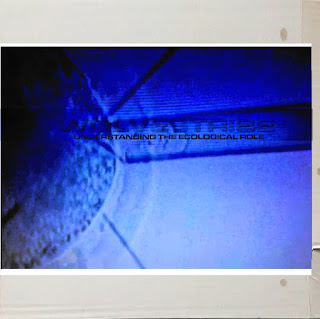 I discovered Wolvestribe in the last review, it was amongst a batch of 6 tapes from the Harsh Noise London Label and Wolvestribe’s contribution to Harsh Noise London Recycled Tape ‘Series #15: Clove’ was just a 21 minute live performance, which was stunning and one of the highlights of the whole batch - there was some excellent other stuff in there. The purpose of this review is to examine Wolvestribe beyond that contribution as I’m very interested. There has been a digital album released on Fucktron Records – Mortification: Mind/Body/Spirit. I will just review Understanding the Ecological Role as a 10” at this early stage in the project demonstrates impressive commitment. The members are two identities – Kshayaath and HTV, two people or two personalities, who knows?

I Opened Your Eyes: This track really seems to go for a trebly assault, with sharp, jittering frequencies, this is a very abrasive track that radiates and pulsates. The sharp assault is impressive, the relentless repetition and consistency in the amount of noises used is good, it doesn’t suffer from death by overload, which can kill off a lot of noise that does this, it no longer becomes effective. There are vocals warped into the mix well, they are woven in tightly. Now I Have to Close Them; both titles blend in together to form one sentence. This track really pulsates into action as a cut up, distorted vocal goes off whilst sharper frequencies cut in and form a mesh of noises. The chopped vocal makes it another abstract noise so it becomes a part of the track, rather than leading it, which I like.

This whole record is very raw, roots Power Electronics, the noise angle is really emphasised in the sound and flits between layered and stripped down during the record. I feel it is way more leaning into Noise and Power Electronics with a hint of Death Industrial, both tracks are strong. This is a solid, outstanding release and I am very glad my adventures led me to Wolvestribe.