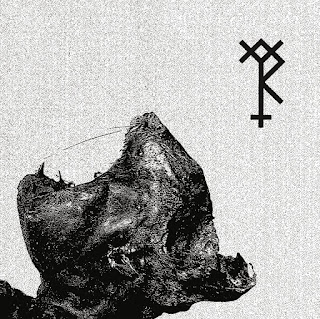 What happens when two juggernauts of the industrial scene collide and re-envision each other’s material? In a nutshell – this recently released limited edition 7” of 300 is what you get. It’s amazing just how much brooding malice and blackened atmospherics can be crammed into something which comes in at just under ten minutes.

‘Konung Krönt i Blod’ (King Crowned in Blood) is savage enough in its original form (which can be heard on TPR’s 2014 Perfection & Permanence album) but somehow Nordvargr has managed to create something even more terrifying by stretching it, dragging it through fire and mud, then rinsing the detritus off in industrial-strength acid. What the process leaves is a blackened bare-bones carcass drenched in decay and filth.

TPR (Thomas Ekelund) slices apart the black-industrial/swamp-dance stylings of Nordvargr’s ‘Salve Teragmon’ with an axle-grinder, reassembles it with rusty nails and surgical sutures, and then finally subjects it to unhealthy doses of radioactivity. The original’s percussive element is the only part of it that’s been retained but even then it’s mutated into something considerably begrimed, soiled, and thoroughly infected and dripping with ichor.

This has been out since May 1st but I have no hesitation in declaring it one of my records of the year so far. It has all the elements that dock into my taste receptors in whatever part of my brain that processes such things and brings out the happy. It’s been quite a while since I’ve heard such stained and tainted magnificence. If you can find the original 7” vinyl the grab it, otherwise it’s available on Bandcamp on the link below:
https://cycliclaw.bandcamp.com/album/konung-kr-nt-i-blod-salve-teragmon