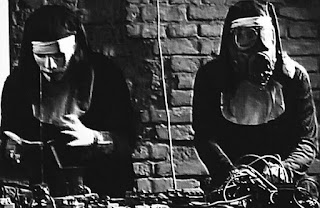 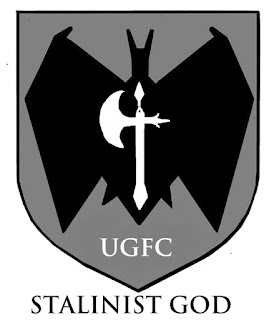 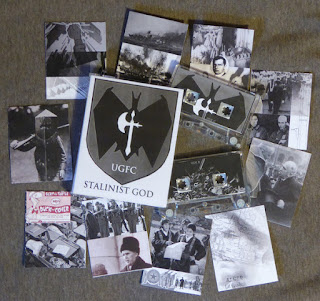 When your propaganda reach the maximal success and you became a God per se, you must just sound your trumpet for apocalypse and destroy everything you have created.                                Text taken from Uncle Grasha’s Flying Circus page.

When I received contact from this project, I was reluctant to review it, I thought it was going to be a joke, like some band guy’s “industrial” side project, more often than not the “industrial” side projects tend to be jerk off projects. It was nice to be proved very very wrong. I put this on, it has massive intellectual back content: it deals with pop cultural legacies and cultural/political interpretations with speeches by Gillo Pontecorvo, N. Ceausescu (7), Kim Jong Il and Kim Jong Un (3) and Emil Hacha. This is the work of Willhelm Grasslich. Past and present is presented as a surreal vision to the listener.

The samples are combined with bleak passages of Bold Industrial type Dark Ambient tracks. It has some good diseased and infected use of noise over speeches, that suggests decay and desolation. The Dark Ambient and Noise qualities are coupled well, the Ambient Industrial sounds serve as the base for speeches while the noise overlays the speech or taunts it, there is strong communication between the elements that are happening in tracks. The ambient passages can go on for long periods of time but work well with subtle variations of sound that happen. The powerful samples of political songs also add a vintage quality, the noise turns some of them into comedy through its taunting, the humour also ensures that it isn’t all bleakness. Samples are impressive, as they are also often left to work on their own as they were originally intended – the last sample on Headquarters is nothing short of epic and a makes a great ending for the album. There is strong character present throughout the entire work. The tape also comes with a free mini booklet of images and credits to the album.

Stalinist God is a strong album and Uncle Grasha’s Flying Circus is a great project - I stand converted.