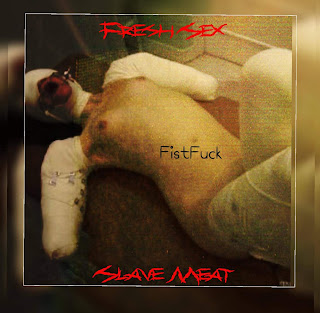 This is the debut release by Fistfuck, a New Jersey Power Electronics act. The mastermind behind this is Thomas Puopolo and the album is a collaboration with Testing Vault main man Daniele Santagiuliana.

Fresh Sex serves as a lengthy intro to the album, the track’s use of sound references the Walker Brothers Nite Flights album, although you know some form of depravity is going to happen, it builds a sense of the grand to the album, which nods to a wider scope within the work. The sound juggles different sound sources - I can hear chopping sounds, suspenseful string like samples and sea waves crashing. I am unsure if sex samples are used to build the noise, but this track does cause anxiety and fear: juggled with the ambient qualities of the waves, it radiates ambient terror. But the use of noises isn’t entirely ugly, there seems to be a range of noises happening. You are constantly left wondering what is going to happen.

Aggressive noise kicks in, swirling feedback and distortion act up – this is Slave Meat. Clocking in at around 30 minutes, I can see the reason for Fresh Sex being so lengthy and on repeated listens this makes more sense. The Testing Vault input is clear through the massive drones that form over the noise. The vocals are sick and depraved, the electronics more nauseous; these as points that are tweaked throughout. What I also like is how the duo drags longer, quieter, less full-assault tracks out, this goes on for too long and becomes a more punishing track because of it; if this was shortened, it wouldn’t work as well. The track falters off in the middle for warped vocal noise to serve as an intro for more noise abuse. The vocal is an ongoing sick narrative as the noise scrapes along to its death.

I think this is a good album, the two halves contrast against each other well. It is a good example of longer, simmering, slow Power Electronics making for a good debut release. As a stand-alone release, good, but it does need to be reinforced by more releases, there are strong foundations that need to be built upon.

it's interesting stuff, and cover very cool.. thanks