DEAD NORMAL -There Is Nothing Left But The Enjoyment Of  Senseless Destruction – LP – 2019 – Harbinger Sound. 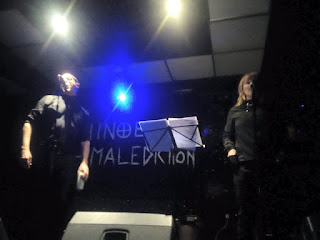 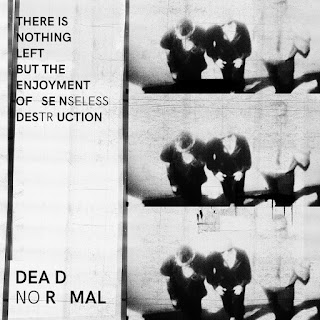 Dead Normal - There Is Nothing Left But The Enjoyment Of  Senseless Destruction LP.

Back in February 2017 I went to see Sutcliffe Judgend play live in London with a four other solid acts  supporting, these included: In Search of Death, Antichildleague and Black Scorpio Underground. An amazing act called Stark was meant to play on the bill, but had to cancel, Stark is Bagman and Bagman is very heavy duty and one of the best PE acts in the UK - an unsung hero. I wouldn’t have liked to have been the act that had to be the compensation for his cancellation, and I wasn’t prepared for the act that actually stepped up and did this. They were called Dead Normal; they were from Barcelona. When they came on it was that nasty brand of cold, choppy electronics with beats woven into the texture of the work. Everything was very direct, this was added to by a sharp delivery of vocals from two vocalists - Zoe and Oriel with noise by D. Forma. They were very ‘street’ and I felt I had received a sonic bollocking for 40 minutes and when they finished, I wanted more. This was one of Dead Normal’s first gigs, the bar was set high that night. For years I have been excited to see what they come up with.

The album is immediately on target, it is that live performance intensified massively and perfected over years. Oriel Rosell’s vocal has intensified, the delivery less sarcastic and more targeted and Zoe V is needle sharp, pointed and factual. The electronics provided by D. Forma (Marrio G Ferrer) are concise, stripped down only what is needed to serve the  work. The delivery and urgent repetition transcribe as punk urgency, Bobby is an excellent example of this. In parts the delivery is cut up vocals that complement the choppy nature of the electronics. I don’t want to debunk the album with comparisons, but it seems to fall in with PE/noise that has clear lyrics, techno elements, sharp delivery and is amplified and intensified by lively, urgent electronics.

I often like to concentrate on how the electronics and vocals work together as one on albums and how the vocals become noise. Here they are too direct to do that, the vocals and noise become one in a different way in that they become an assaultive unit. The use of beat and looped, repetitive rhythm isn’t detrimental to the work, often beats and noise can easily fall to shit, this isn’t - it’s incorporated into the work effectively.

It’s hard to offer any criticisms about this album as it’s very strong and it easily one of my 2019 highlights of which there’s a lot of strong competition (read through my reviews). I’ve been listening to a lot of stuff that teases with techno and warped beats of which this shares parallels. This is a great debut album and I can’t praise it enough.