I was keen to attend this gig and see all the acts mentioned; I’d recently reviewed the Kuebiko cassette release on Outsider Art Records. I am also a keen fan of Knifedoutofexistence and Cremation Lily and have reviewed their stuff in the past.

Kuebiko played on the floor of the venue, he was surrounded by devices which included contact microphones, chains and effects pedals. This worked as you had to look down or be directly face to face with the artist depending on whether you stood or sat. Sounds started small and gradually grew into a larger, harsher, more frenzied assault of noise. As things intensified the chains got smacked around, contact mikes were put in the artists mouth, Sellotape mummified his head and things descended into a sonic tantrum. The improvised, performative aspects of Kuebiko made for an impressive set. 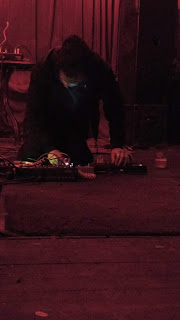 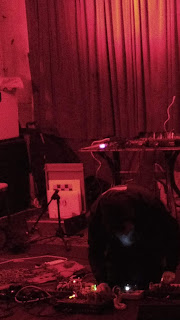 I knew nothing prior to this about The Mysterious Monopole. The artist looked very different, her eyes were covered with patches of black lace and she was dressed in Brown with an old tie on. This coupled with how the performance built up gave it an impressive ‘wtf odd’ factor. I don’t mean this as a criticism, but she built tension before it even started, which is quite a feat. Samples of noises and keyboard lines were played as the show built up to some impressive demonstrations of unique noise making. The artist started sawing up packs of Ryvita type snacks with a Contact Mic enhanced saw and then she was playing homemade card records on a turntable. The noise was crumbly and parallels the project Evil Moisture with unique sources of sound, but more warped off in her own tangents. Like Kuebiko the set was fully improvised, with a stronger performance art bent. An audience member was brought in to do vocals in a repeated chant as the artist crunched up Ryvita and trampled on the saw. This seemed to be a commentary on food politics that dominate life. I was half expecting to be force fed Ryvita or something as the artist made full use of the stage made for a truly excellent performance. To see someone coming at noise from such a truly eccentric, unpredictable angle was very exciting. 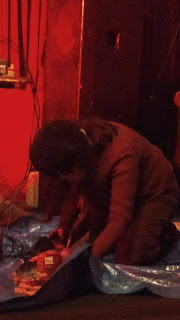 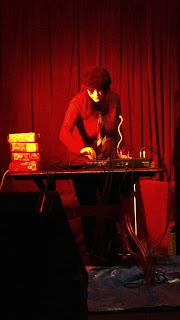 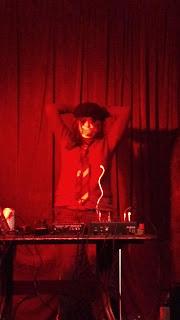 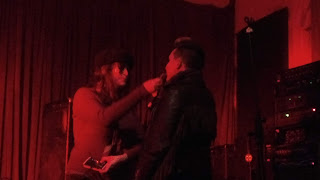 This show was a collaboration between Cremation Lily and Knifedoutofexistence, which is another self-personified Power Electronics project whose slow burn growth over the years has been impressive. The collaboration started with Knife’s more experimental PE set with both artists contributing noise, Cremation had a minimal set up that seemed to consist of an electronic device that threw out sampled sounds and beats and a tape player, where as Knifed had a larger, complex set up. The noise got harsher and louder yet contained good atmospherics and the Knifed vocals were cleverly put in the background as he shouted into the microphone, this added more performance to what he did as he faced to audience. Last time he did the whole back turned to audience type performance thing, the frontal approach was more direct and way more effective. Both artists seemed to fire off each other. The noise seemed to be able to say more without being overpowered by vocal rage. The performance was a mass of complex emotion and range. This mixed with the distanced vocals and rich textured sound made for the strongest Knifedoutofexistence show that I’ve seen yet, I was very impressed – the slow burn development continues unhindered. 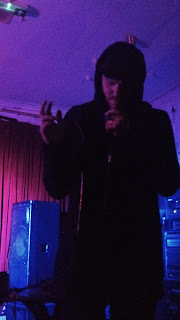 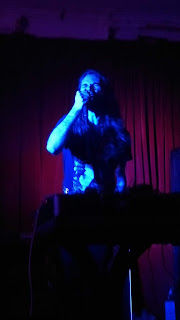 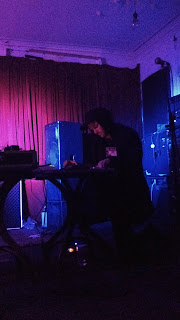 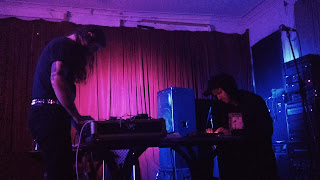 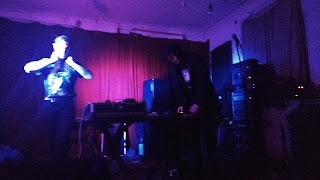 Where Cremation Lily is concerned, I’m politely obsessive. I believe the project upped the ante with Power Electronics very early on by coming from such a deeply personal angle. Funeral Home has one of the most impressive modern vocal performances that I’ve ever heard, that and S.T.A.B.’s Day of the Male are the vocal benchmarks to me in how I judge modern Power Electronics. The project continually progresses and changes with each passing year; I’m excited to hear where it’s at each time. This is my fourth time seeing Cremation Lily and I enjoy each performance.

The atmosphere stripped down as things moved to the Cremation Lily part of the set.  What threw me was that I was expecting a more ambient set, yet there were beats, moody electronica with passages of noise thrown in, the shift between the two sets was smooth and effective. Cremation’s vocals shifted between agonised shouting, distorted rage and some actual singing. Knifed effectively switched from complimenting to contrasting the work with a range of sounds. Previous Cremation Lily sets had been displays of noise that just exploded where as this was a longer musical set with continual shifts into different musical parameters. The depth of feeling, past sadness and sonic texture was impressive as it seemed to run through both sets. Like any good set I am left with questions, while I truly loved both sets and saw both artists conquer new heights, is this duo thing something that should be recorded and developed outside of their individual work? Both artists shifted into new areas, they complimented, supported and built on each other’s strengths, not allowing for any weakness to hinder the sound.  Had it not worked, this whole collaboration could easily have had its ass kicked because of the strength of both the support acts. But it did work, giving an epic finale to a great night.