A new batch of tapes by Knifedoutofexistence's own label Outsider Art, is this a fluke or are they a label to watch with their finger on the pulse of the best UK Noise and Power Electronics? This lot certainly hints at that. 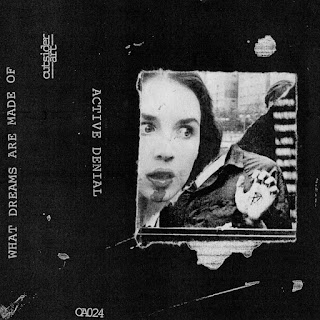 After their impressive debut, I have high expectations for the second Active Denial release. As Black Sontag starts, vocals are overlaid onto simple, accelerating electronics – forming an impressive rant over minimal noise. Smoke’s rant outdoes the first, the electronics are much choppier and uglier as whistles go off. The vocals on both seem to get angrier as each track progresses. Wish Harm is slower and uses a slowed down vocals and farting, pulsating electronics. The slowed down vocal is complimented by a warped shouting vocal, creating a more abstract track than the others. Myth of Madness is explosive blasts and sharp feedback accompanied by another rant sermon as things really kick off to an end.

I wasn’t expecting Active Denial to get rawer, I was half expecting them to twat up the sound with bigger gear and massive displays of electronics, but no, they’ve stripped it back – a case of less is more. The first tape was ace, this one is even better, four-tracks peeled back to deliver a raw bullet of truth. Excellent work. 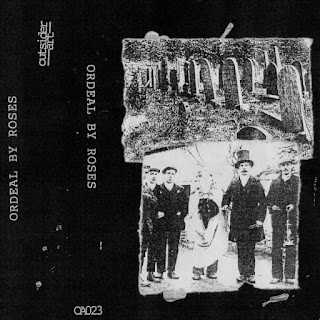 Ordeal by Roses is a Welsh PE project that takes a personal approach themed on Death, Loss and Mental Struggles. ‘I’ begins with a pulsating raw choppy, deep, gravelly vortex of sound. It morphs slowly, gets interrupted by sharp digital noise and what sounds like a very effect laden, unintelligible vocal until sharper electronics rage inwards.  The first track varies itself constantly to stay consistently interesting. Church hymns at the end work well sonically and conceptually.

II is murkier.  It grows slowly to allow a distorted, shouted vocal to deliver its sermon,  takes a more minimal approach, but is equally as impressive as I. The vocal forms the main noise as the backing is lower and bass like to allow the sharpness of the shout to take the lead. Both tracks really contrast against each other. This is a very strong debut and I am excited about hearing more from this project. 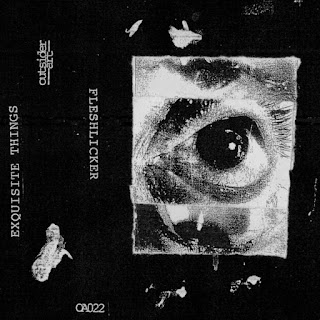 Fleshlicker is Michael D Brown’s solo project. This is described as Grind core through a Power Electronics lens. I am unsure if this is a collection of tracks made into one, one continuous track with different passages and cuts. This pulsates, rhythmically at high speed to the point where it becomes a very violent and extreme listen. It functions in a more extreme way than and like the band Nerveskade and the early 80s Japanese D-Beat that incorporated feedback as part of their sound and influenced them.  Exquisite Things is overload beyond overload, but a very forward-thinking collection of work. 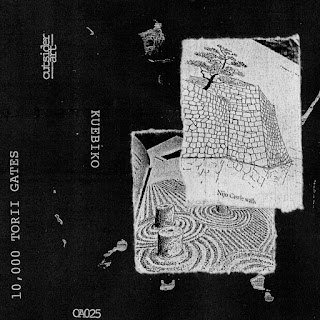 I saw one of Kuebiko’s rare shows once, he opened for two more established Noise acts. What happened is he played on the floor, knelt over his equipment, electronic noises went off, things started getting battered and hit until a huge sonic tantrum erupted. This was undoubtedly one of the best Power Electronics shows I’ve ever seen, it wasn’t a gear-fest it was superb effective delivery and performance. I am unsure to this day if it was planned or improvised. Let’s see if Kuebiko can deliver.

Death synth drones and walls of distortion combine to make big sound. I think there’s a vocal buried in there, but I can’t tell. The three elements make for massive sound as feedback arches out to expand and retract the sound.  A more recognisable vocal adds to the equation, whilst still buried in the mass of noise. Un Ah is good Harsh Noise.

Jizos In the Moss is a lot more buried and lower in sound at first, this serves to really enhance rises in sound and interruptions to good effect. The splattered distortion and drone contrast and shift against each other forming bold movements in sound. He has delivered, yet another impressive debut, let’s hope there more work in the future to build on such a great start.