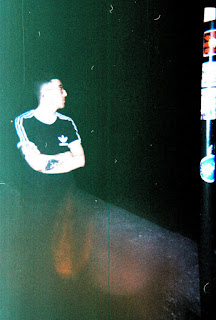 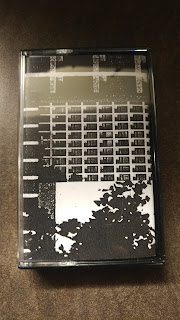 Natural Orthodoxy is a Manchester UK based project that formerly operated as UVB-76. There have been around 5 releases under the Natural Orthodoxy name on The Aleph, Vanity Pill Tapes and Phage Tapes. There have been live shows across the UK with Pharmakon, Svartit and Full of Hell. Their latest tape Trust Exercises tape on Total Black comes with a free A4 poster.
Natural Orthodoxy is part of a faction of UK Power Electronics that doesn’t seem to hark back to the conceptual themes of the 80s glory days, they seem to come from somewhere else; a personalised source of anger? I am aware of different clusters of strong projects and labels in the UK, despite the lack of frequent gigs and things being more difficult for promoters now. However, coming from the North in Manchester, this resonates bleakness before it’s even played, when played it has an air of loss despair and then resonates even more bleakness. There’s lots of low level, bits of noise passages of sound happening as things build up. The vocals that are at first are shoved in the background and very effective, it often sounds like a shit cop-out when some projects do it, but here it ties in with the work perfectly. The visual juxtapositions never ending flats and glimpses of nature say plenty and compliment the work well.
The second side is the build-up that starts off as a continuation of the earlier bleakness, but riots of sound soon seem to emerge from it. The vocal is now well at the forefront and leads into the choppy, harsh walls of Lost Time. Cognitive Repetition is relentless repetition with a vocal sample buried underneath, warbled vocals that take the forefront look back to those 80s glory days of the UK noise scene whilst the keyboards resonate forwards.

I’ve been listening to this a lot, there are a lot of nods to older Natural Orthodoxy material that then push in new directions. At first, I felt this was just a good collection of separate tracks, but on closer inspection it all ties in well to make a very strong overall recording and the experimental qualities shine across the variety of tracks presented. What this has done is made me interested enough to go and look at other recordings by the project and I look forward to whatever the future brings. I’m glad I discovered it.