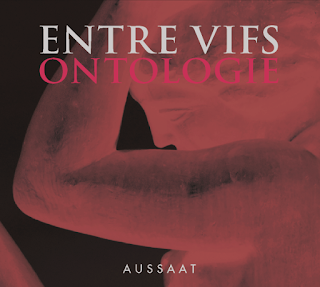 Entre Vifs is a French Noise project now consisting of members Shirubee and Zorïn; they have been actively releasing works since 1989. Mirka Lugosi was involved at some point recently. In the eighties it was Zorïn and Ruelgo. They were linked to Le Syndicat amongst other artists. Ontologie is their seventh album and is released on Will-I Stasch’s Aussaat records. The tracks on the album were recorded between 2011 – 17 and performed and recorded live in their own Noisecraft Workshop.

Stainless (Session33) delivers some impressive passages of noise, I am unsure of all the exact sound sources, but the act does have their own handmade steel instruments that are then sent through microphones and effects. It really makes for a strong Cacophony of noise that shifts and varies itself continuously. The shifts are good as the work rapidly moves into a lot of different areas of noise within the track, the only familiars are some of the noises used. I am unsure of the source of the sounds that contrast the more obviously metal clang like noise. 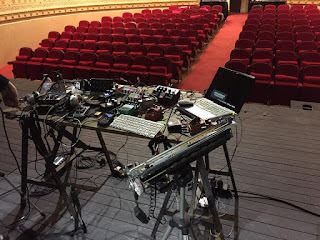 Charivari (Session 35) uses sharper noise than the previous track but is made of a more minimal palette of noise. This makes the noises a lot more severe yet the dialogue between them has a humorous and playful feel in comparison to session 33. It highlights a signature Entre Vifs move which is the continual sound shifts, yet this still differs massively from the first track. An Sich Und Fur Sich (Session 44) uses a lot more cut-up sound that is more fractured as a whole, equally good as the others, but again it is way different. This one is violent and combative in its delivery. As it moves into Charivari (Session 35) the work breaks down into very minimal noise where individual sounds play solo parts before duelling other sounds to then become a duo. Frequently throughout tracks, noises do sound vocal for short spaces of time. The minimal phase of session 44 gradually builds into larger compositions of sound yet holds back enough to still be able to gravitate and shift around. This breaks up into another minimal-noise-minimal again passage, constantly interesting.

None of the Above (Session 46) emphasizes the sound poetry quality of Entre Vifs work, repetition of noise is used for the first time and almost seems to be trying to break into song as the sound dialogue is so complex. This is a lot more pulled down than the other tracks, it literally is an intense final conference of noises. A great end to a great album. 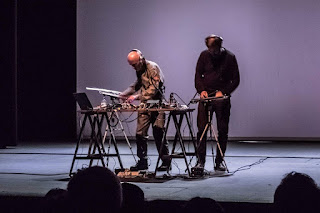 I don’t see this as a compilation of tracks just the results of many sessions tied together to make a complete album, their sound does have noticeable trademark sounds that happen across different tracks. The work also has a maturity and sophistication that runs throughout; the classical, deep red cover emphasises this. The work seems to combine sources of sound and instrument abuse to excellent effect. This is one of my favourite pure noise releases that I have ever heard, can’t say enough good things about this album.

By Nevis Kretini at February 27, 2019
Email ThisBlogThis!Share to TwitterShare to FacebookShare to Pinterest