Having reviewed most of Steve Bagman’s previous STARK releases, except the elusive first very limited release, this naturally led me towards his main body of work as Bagman, this work is more complex than it at first appears. In order to look at the different sides of the project, this overview covers all the work I recently received off Steve. Based in the UK, Bagman has been prolifically releasing material since 2008.

Kenneth Mckenna continues the tradition of British Serial Killer themed Power Electronics releases, the brief info that can be found on him online, makes for some vile, disturbing reading to a point where I questioned if he was a fictional character. His record lists some hideous crimes, the knowledge of that weighs heavily on the recording. As an album, this revels in low end, bass heavy sounds, this allows for sharper pitched noises to perform effectively. The walls of deep crackle are frequently abused by the sharper sounds. The muffled vocals sound tortured and agonised. As the lower end noise begins to dominate it creates distance in parts of the album, so that it isn’t all direct assault. These methods seem to pave the way for STARK to happen in later years. As the album progresses, the vocals get cut up by choppier passages of sound turning it into an abstract, agonised noise. Further on, the noise seems to be deliberately dying in parts making it reek of death and despair. This was the second Bagman recording, an extreme start. 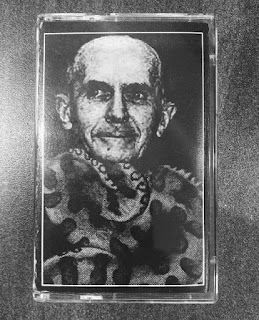 This is a more rounded release, it varies things a lot before they can begin to get formulaic. Project for Tool begins with an excerpt of distorted narrative which is then interrupted with insane, jagged, electronic noise that demonstrates higher levels of sharp frequency abuse as melancholic drones resonate in the background. There are some impressive combinations of arching noise, news reports and Bagman’s distorted vocals – this forms a narrative, its soundtrack and a response. Thing do get very murky and atmospheric in parts, others are purely focused on full frontal assault, some tracks again sound like they are physically dying as they simmer down. As earlier Bagman material goes this does set a higher bar for future recordings. 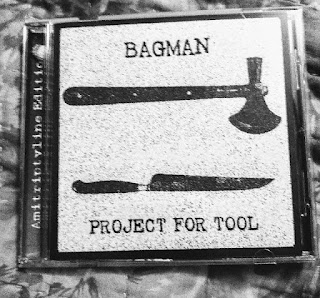 This self-released recording reads as recorded sordid sex acts over ultra-violent Power Electronics abuse (both), it goes into the more insane, sicker Bagman territory straight away. One Master is an immediate, confident demonstration of rapid vortexes of noise layered by further aggressive sounds. The vocal narrative isn’t always coherent, but when it is - it’s a man and woman in an act of (male) sexual domination. The massively expansive keyboards also seem to nod towards his STARK project a lot, but the Sex is very Bagman. When I listen, I am equally intrigued and equally repulsed? I can’t help but picture what vocals I can make out; I’m forced to engage with the work in a shifting way between narrative and sound. The noise adds fantasy into the reality, the metal abuse creates and enhances pain. The massive drones caused by synthesizers are wide and impressive. One Master shifts the main intensity between narrative, noise and drone repeatedly and effectively. This is a great piece of DIY nastiness made from Bagman’s extensive UK porn collection creating a massive sounding, horrible, fuck off recording. 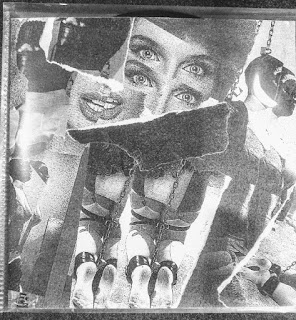 A huge sounding, one track release that is themed around Francis Bacon, with images reflecting that. This shares the same huge general sound as ‘One Master’ but is also a shorter, choppier recording allowing the noise to be the central focus. The sharper noise seems to continually batter and dominate a wall of distortion. Interruptions of shifting noise are frequent, it isn’t allowed to flow. This dies off as the vocal enters, incoherent rage pushes itself to abstraction; as this dies off, it allows for the noise to rebuild. I question did he do this in one session? Is this the best of several sessions? This is the strongest release of the bunch, very harsh and presented nicely in a Jewel case. What we have here is Bagman at his relentless, harsh best; with the noise going off into further extremes of violent abstract territory. This is a fully immersed work where performer and equipment are one; the best, fully realised Bagman recording by far. 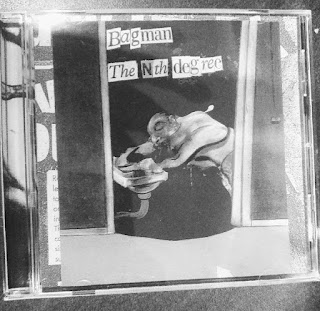 Caveat emptor is a Latin term that means "let the buyer beware."
https://consumer.findlaw.com

Caveat Emptor hints at a dark past and present forging a tormented, aggressive outburst of sonic violence. The sleeve notes point towards controversial children’s author Judith Vigna, the artwork depicts cancer and domestic violence. Stark doesn’t seem to adopt ‘outside’ themes like Bagman can, I get the impression Stark is purely personal.  Everything dies down to incoherent dialogue that becomes a ranting noise that dances with the throbbing synth sounds. This is the simmering territory in which Stark truly dominates. The latter tracks shift into pulsating, meditations of noise that serve as the basis for a ranted sermon. On a physical level Caveat Emptor part plays with traditional early Power Electronics sounds in order to grab it and drop things down into the murkiness where the project thrives and truly leads. Caveat Emptor is an effective, psychologically disturbing cassette. STARK has produced a triumph of releases have been consistently strong. 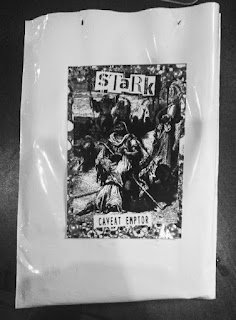 STARK is clearly personal, and excels in a murkier, subtle Power Electronics territory. STARK was immediately developed, I believe the project was being developed for ages in the BAGround prior to releasing. The Bagman work took longer to mature and is now very up there in raw noise/PE terms and seems to push new ways to disturb and attack. I do believe that as a project it isn’t as spontaneous as Steve claims, strong conceptual pre-planning is often apparent; it is woven into a lot of the work. It makes the listener think when engaged, it constantly raises questions; impressions of it seem to change and shift, which is the case with all great Power Electronics. The recent releases are far stronger than the earlier material. They are a lot more relentless and more effectively direct in their assault when needs be. Furthermore, STARK seems to be a modern PE project, it is very in the now, of today, in contrast Bagman was tied to the past like the early Sutcliffe Judgend, COME Org and Broken Flag early days in its infancy but then seemed obsessed with continually finding new ways to grow, move forwards, improve and develop.