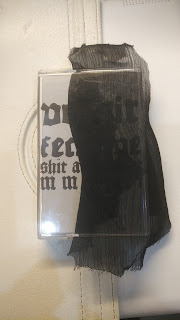 I am working on my methods of how to write up a wall up for a review, I will record my immediate thoughts and put them into form. Neither side is marked. I assume I am correct on which side is who.

Vomir. Like blisters peeling to allow an eruption, side A begins.
This wall seems to have a mid-ground of bubbling bass that is over layered by static crackle. There does seem to be background movement as if forming a tick tock to measure time, maybe this is a masked background rhythm. This feels like the centre of an intense flame like when a Bunsen burner flame turns blue. As it builds it resembles the roar of flames. At the same time, it feels like a wall that takes the form of the never-ending charge of stampeding horses.

Could it be a transfer of energy, a continuous line of sound, a chaotic wave of sound? The flow of wall waves that move to and from. The tick tock is replaced by creaking. The tick tock returns, is it real or am I imagining it?

Am I adding form to nothingness? Perhaps the nothingness presents form to me?

Fecalove.  Bouncing sounds clang, high pitched sounds join in. Is a string instrument being abused, the core sound source of this piece? Side B continues like this for some time. This serves as the intro to some fast paced cut up assaults of Noise.  Harsh blasts of noise are reinforced by some serious digital assault and tape warping. Things get drowned in serious bad recording or deliberate smothering. Until it resuscitates itself and sharp noise abuse continues, there appears to be old radio frequency shifting happening, this is more abstract than the other side. A gorgeous choppy assault of sound. It continues to rage through itself and build up, the latter part of the passage is a lot sharper in sound than the start. Some form of metal abuse begins as the bass gradually returns. Static crackle is in there too. The faltering sound falters in the foreground and the background. The sound dies slowly and beautifully.

The fabric with the cassette adds contrast and sorrow to the visual appearance, it makes the simple layout of the front cover chaotic.

A moment in time of noise that is in parts accidentally beautiful and rich.