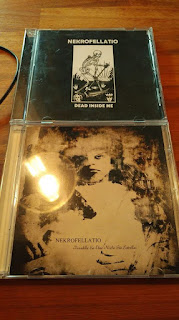 Nekrofellatio’s Dead Inside Me was the debut CD release for the Belgian Death Continues Records label in 2012. The label went on to release a strength of material from some impressive acts. These included In Search of Death, Sutcliffe Judgend, Femeheim, Autopsia and Skull:Axis. Nekrofellatio I had reviewed for another site on the release of Dead Inside Me. Upon hearing this release it was evident Nekrofellatio was a prime example of great Death Industrial.  The man responsible for Nekrofellatio was Leonardo Carballo Canto, the project seems to have ended sometime in 2017. My Shamanic hope from this review is to spark further interest, ideally more new work.

The first album Dead Inside Me, uses simple juxtapositions to create a dialogue of sound through around 4 different sources. Most tracks are unsettling through the nature of the sounds used and unexpected increases in volume. Canto seems to come through the electronic noises, it is if he is manipulating the dialogue used in each track, his persona embodied through the noise. Sickness and anxiety is depicted through the noises via nauseous violent repetition. Dead Inside me is chock full of abstract collages of horrible sickness, with Canto’s consistent noise commentary. The album later blurs into deeper abstractions of sounds and samples furthermore as it progresses.

It was only recently upon returning to Facebook after a long absence I thought of Leonardo’s work and set on buying the second album from Hagshadow which I had originally missed out on. This was released in 2014 and called Pesadilla En Una Noche Sin Estrellas. It had been received positively in Noise Receptor, but I was keen to hear what came after the impressive debut.

I am not sure if it is the mass of beer I have had tonight to celebrate the end of dry October but Pesadilla En Una Noche Sin Estrellas immediately radiates more sickness and suffering from the outset. The album seems to continue where the murkier end of Dead Inside Me left off, it is more complex and swampier in the overall sound. It is as if Canto has entrenched himself further into the wider sound of Nekrofellatio. The drones and samples of Sex Electronic Poison are unified together well. Father’s day uses violently relentless, repetition of sick noise sounds to check in with the projects core roots. It functions like wall noise yet with synth repetition replacing the walls of distortion, things go off in the background continually. The dominance of Italian language titles this time rounds only serves to add mystery and intrigue to the work. By mentioning this, I am aware of the development into deeper ambient/abstract territory, this lacks the shock elements of the first album, it is less traditionally Death Industrial; drifting elsewhere to it’s own territory.

With a lot of recent British Power Electronics stuff I have been hearing, there has been a shift into lower, murkier, deep regions of sound: this is a fucking earlier, strong example of someone doing that. Nekrofellatio warps his own work beyond belief to the point where it’s nearly unrecognisable; There’s been a massive shift between albums. As a side note  Pesadilla En Una Noche Sin Estrellas goes bonkers and ‘elsewhere’ as it ends.

I can only conclude this review bluntly, Nekrofellatio was fucking brilliant, both albums were brilliant shit. From an anonymous blog spot, internet and futuristic point of view my advice is this: “ Leonardo, continue your project, take it where it needs to go, this work is too good to be a footnote in some book or zine’s future history, go now, do it, find labels, make your own, we await for fucks sake!” End of review. 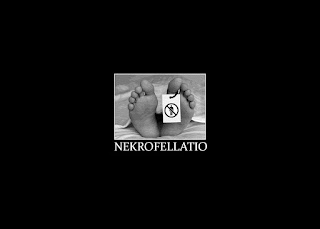