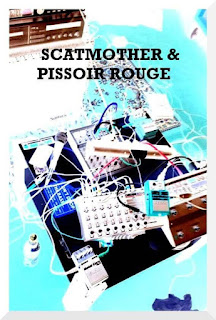 Germany’s Scatmother has been active since around 2015 and have done 6 releases on the Filth and Violence, Wrath, Total Black and Obsessive Fundamental Realism labels – some nasty, naughty, impressive PE credentials there. Pissoir Rouge have so far released one cross dressing, masochistic tape on Obsessive Fundamental realism in 2018. 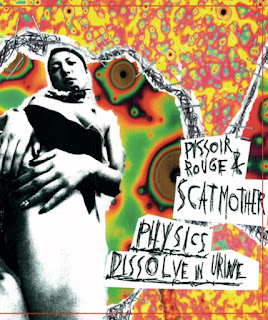 This opens very harshly with urgent blasts of immediate noise with way over the top screamed vocals that are punctuated by violent beeps. The level of violence within the sound is way higher than most of what I have heard: feedback from the microphone fills every gap in the vocals. I can’t tell what’s making the noise aside from the vocals it’s very few (2 or 3 at most) elements that work together to make an entire mass of sound. The way of making noise - blasts of distortion, vocal noise, blips, feedback - has an American 2000s noise feel which I do like. I am particularly thinking of the Obscurica label.

Even by the second track when things pull back it’s humming, and sharp pitched feedback tampered with shouted interludes it totally pulls back from the levels of the lead track, it’s more like a few friendly jabs to the head instead of the pummelling given by the opening track. The track intensifies in screaming and aggressive punctuated jolting noise.
The third track is a multi-levelled wall of feedback, hollering echoes and shrill wobbling noise. It’s more of a deliberately failing Harsh Wall that is very gappy and shrill, so it doesn’t allow you to zone out/into the wall as is the case with a lot of HNW, your attention is jolted around too much so you’re forced to engage with the work.

Pet-play shifts the vocals shift into sheer depravity, whilst arching noise and shrill feedback intensify everything massively – a sonic amplification of filth that descends into violent abstraction. Pisstrophen ups the violence again into an explosive war of sound, it cleverly uses three elements to do this - sharp feedback, blasts of distortion and mad vocals. Rites really slows down, there are minimal elements again, but it slows shit down to deep, threatening rage.

Nature has a more direct wall flirtation until vocal rage and more high-pitched jabs of sound destroy it. If anything, the wall exists for the high pitches and vocals to be in the centre stage, it is as if they are trying to out-do each other whilst teasing and upping the ante between themselves. Noise as theatre. Sex-Slave fits back into the depths of depravity, a horror of a track I don’t want to hear again, it deals with the horrors of contemporary Sex-trafficking very effectively. A vile description of modern day horrors on the news, bringing the reality of the situation home. More vile sadomasochism and intensified noise war ends the split. This uses a more-choppy digital kick with distortion and shouting. 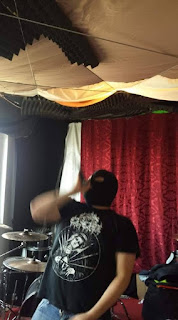 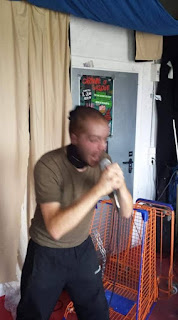 I appreciate the directness and sheer, mass intensity of the delivery. This was recorded live in a bunker, no over dubs it is essentially a live recording session between two guys. It is in a sense the shock of earlier Power Electronics intensified through way more aggressive lyrical, direct content and a playful use of harsher, aggressive noise, sort of intense barrages swung around – foreground, back ground. Both act the part. It isn’t nice, it is a violent and traumatic listen. This is simply true roots PE with modern harsh methods and yet again more good work from OFR.