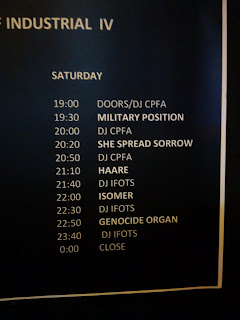 
Attending the Saturday of United Forces at Electrowerkz in London was a bittersweet event. The impressive footage  of the previous night makes me very aware I only saw one great night of two. EDGE OF DECAY, ARMOUR GROUP, SHIFT/KOUFAR, KEVLAR and KE/HIL were all said to be on impressive form.


Military Position is the project of Australian based artist Kate Harriet Morgan. PVC clad and pissed off Morgan gave an angry set that combined harsh, repetitive electronics and rabid vocals. Knives and chains were rubbed against contact mics until they gave out. Military Position’s set intensified to a climatic end with Morgan swinging way too closely at the audience with her chain. The institution themed background film’s female narrative wasn’t present, it was replaced by Military Position’s fucked off, threatening barrage. Morgan was confident, strong and in-control. Her set was impressive through its’ sheer dominance and aggression. 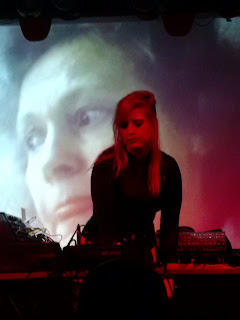 She Spread Sorrow is Italian based Alice Kundalini, formerly of Deviated Sister TV, has released one album ‘Rumspringa’ on Cold Spring and is soon to release ‘Mine’ on the same label. Her whispered vocals and low level Deathscapes worked in perfect conjunction with her background videos. They featured a young girl moving and posing in a kind of abstract narrative that was contextualised further by Kundalini’s whispers and chimes as electronics rumbled and echoed in the low levels. She Spread Sorrow delivered a fractured nightmare of a performance, clearly a leader and not a follower. 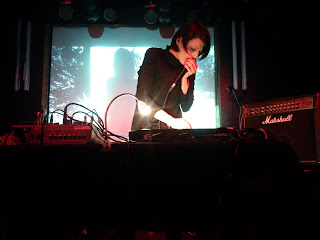 Haare is the project of Ilkka Vekka from Finland. For this live appearance Haare was a duo, with another guy on laptop and electronics while Vekka played guitar. The guitar work was digital and affected, it wasn’t all riffs and solos, more in line with how Sutcliffe Jügend use electric guitar. The set was abstract, psychedelic, occult laden topped with complex visuals. I had a 'whatever' attitude to Vekka's crowd glaring, but the confrontational, menacing factor added another dimension to their layered performance. The sound was slow and expansive with a lot of intricacies gradually woven in as it constantly shifted and developed. 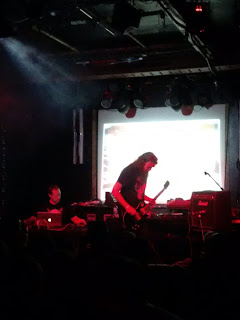 Isomer from Australia was one of the most surprising acts, in contrast to the online tracks I have heard, David Tonkin’s performance had a compressed, hidden emotive, layered quality. Tonkin was an impressive frontman, but that indescribable something woven deep into the sound was there.  It wasn’t anger or aggression, but something other; a deep and heavy context which you could close your eyes and absorb as the core of the performance. Sharp, repetitive frequencies and contact mic abuse built things up. Isomer is well worthy of further investigation; another epic performance to the night. 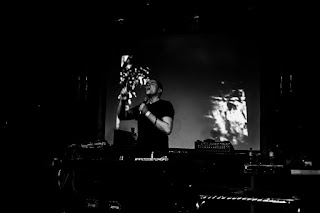 
Following such a solid batch of impressive younger acts, headliners Genocide Organ had a lot to live up to. Past glories of the last 30 years wouldn’t be enough after what came earlier in the night, tonight was the acid test. I was immediately thrown as G.O. didn’t wear masks as I thought they would. The four members combined electronic noise that immediately ripped into an impressive set that was a barrage of their trademark abrupt, urgent style of Power Electronics. Both lead singers took turns to whip the audience into an intense frenzy, Wilhelm Herich on the edge of the stage shouting into the audience which stirred things up and slight chaos began to erupt. I don’t know what happened, the audience became further frenzied into a pit as Genocide Organ dug well into their back catalogue right from Leichenlinie up to Obituary of the Amerikas. I was impressed by their direct audience manipulation/confrontation. Genocide Organ’s complex, multi-faceted collective sense of self intensified the night’s proceedings relentlessly through layered visuals that consistently intensified the atmosphere. This brought United Forces of Industrial 2017 to an impressive and frenzied finale. 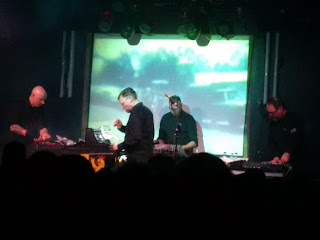 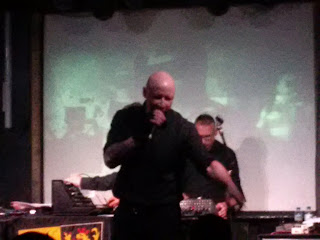 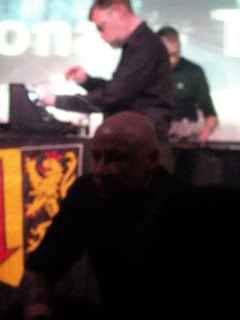 all photos by me, Isomer one used by kind permission of Marcin Klimek.