Frank -2016 – Obsessive Fundamental Realism – OFR – 006.
Monolith.
Tears Will Kill Us.
Close Your Eyes 83.
Lifting the Veil.
Dangerous Consequence.
In Vino Veritas.
The Morning After the Night Before (For Sutcliffe Judgend).
Hog.

My introduction to the work of STARK was an odd one, it came about due to a cancellation. Stark was meant to be one of five Power Electronics acts at the Hilumenoua Malediction in support of PE pioneers Sutcliffe Judgend in February 2017, at the last minute they cancelled and were replaced by a choppy, no-nonsense act called Dead Normal. I thought nothing of it, I did not know the project. When writing up my review I looked the project up, I found the Facebook and Discogs page and read up on STARK. I found out that this was one project in the wider prolific work of Steve Bagman who is also responsible for Bagman, (gone Dark) Bleach and Stosstrupp. In an interview with records reverse, Bagman refers to his struggles with OCD, Bipolar disorder and addiction. The name Stark comes from James Dean’s character Jim Stark in Rebel Without a Cause. All Stark tapes are apparently recorded in one live studio session with no overdubs.

Curiosity then lead to me buy the untitled debut tape from Black Psychosis Blog-spot. In no time at all I ended up with all three of the Stark releases. Bagman’s no-show and what I heard on FRANK ended up with me becoming obsessed very quickly. Due to this I have chosen to write this article about his body of work as Stark. As a reviewer, all the new stuff I hear now is compared to that of Stark and very few truly stand up to this body of work. 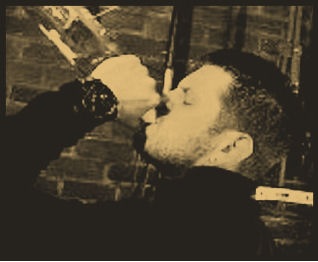 Stark’s debut tape immediately sounds like nothing else. The work has an immediate older analogue sound that combines teasing warped electronics, oscillating synthesisers and samples. Some of the electronics are so primitive, it makes an intense sound that darts between spacious and compressed. Are the samples police tapes, recordings from Bagman’s past, film samples or news samples? Bagman’s own vocal; screams, rambles incoherently and shouts over the proceedings and at times converses and reacts to the recorded dialogues. The personal conceptualisation and incoherent aspects to the recording up the intensity of STARK. I am unsure if it is themed beyond personal experience, the album to me appears to be the inside of Bagman’s head, the artwork also seems to imply that. Sampled clattering and Bagman’s background ranting add a haunted quality to parts of the tape.

The inside cover is a Rorschach test, the cover’s fold over is brains which reoccur a lot in the artwork. The front cover has head shots of lots of individual women, eyes covered with lines across them, some women are crossed out. The artwork for STARK is serious and intense, the sound even more so. 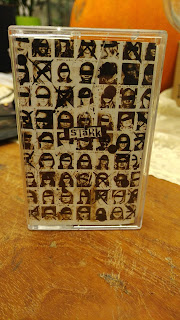 Frank is more timeless in sound than the debut, it is also considerably more tortured and focussed as an album. The simplified electronics are homed in and concise. The vocal is the main tool for instant claustrophobia, yet the minimal nature of the music seems to allow for more space, the two elements continually collide. The vocals are close-up and compressed; forceful and domineering. Samples are sometimes suffocated to the point inaudibility whilst electronics hover over the murder scene.

Frank is like bad memories that surround a bleak past. When it plays, I am somewhere I don’t want to be, mournful drones on Tears Will Kill Us reinforce that. Whereas the debut had interesting quirks, Frank is solitude, failure, loss, threat, sorrow compressed over 8 tracks. Is Frank Bagman’s past and psyche dragged across 8 tracks?
As with all Obsessive Fundamental Realism releases, Frank is presented in a black bag with the artwork pinned to it. Inside this there is the tape plus a variety of inserts linked to the album. 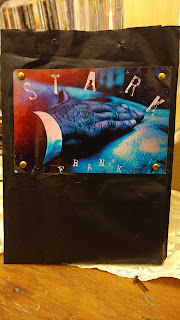 Hyena has an immediately contradictory sound it holds back, but is a lot louder and built up/layered than other Stark recordings. It’s sound really delves in a lower level mournful area of noise. Bagman rants and raves in the background of ‘Perfect Poison’, as with other Stark releases there are no displays of rage and power, it is something ‘other’, as if something personal, not something outside of Bagman has been conceptualised into Hyena.

Bagman’s vocal is replaced by a sampled interview on the reverse side ‘Bridgewater’. Atmospheric drones hover in the background and rise to submerge the entire dialogue in parts. It ends as if everything goes into override until it eventually dies out. Oddly the inner cover is a map of Lawnswood in Stourbridge. 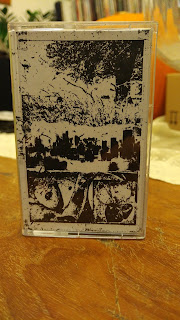