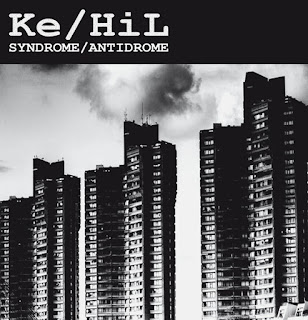 The stoic virtue of steadiness must lead to silence in its most extreme case. Isolation in silence.
Quote on the back of Syndrome/Antidrome.

I was thinking a lot about doing this review as it is tough reviewing a project you aren’t that familiar with. I was keen to review this as I’m a recent convert to GO’s work and Ke/Hil is two members of the said project. This album has sat on my shelf for quite a few months. Ages in fact. As with most releases on this label, they need a lot of thought as they are so confrontational.

I’d gone for a few walks over this time. I have a long-held fascination with tower blocks/flats those gigantic structures holding hundreds of family homes. Monuments to the living ideals of decades past that are always there and always relevant; even more so now in the wake of the tragic Grenfell Tower disaster of 2017. I always take photos of various tower blocks when I see them on my walks as they amaze me, they signify various points in my own past. I visited in flats, played in flats, fought in flats and ran for my life down the stairs of those flats. Due to this, they have a massive emotional resonance. Pillars of pure isolation. Cold, images of Tower Blocks and Flats dominate landscape on the covers of Syndrome/Antidrome. Staring at these gigantic, compressed living areas gave me a way into this album. 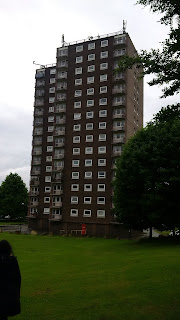 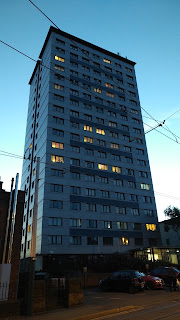 The first side of the album demonstrates long passages of cold, repetitive electronics. Drones, slow beats and echoing noise build an image of the hard landscape of tower blocks. The album certainly alludes to the failure of the tower block as a project. Farmed Flesh, Designed Poverty and My soul is dead are sonic poems about the isolation, humiliation and emptiness tower block life can bring.

Voice samples are abstract, are they representative of what Blocks of Flats became? Is it the true intentions of the projects? Are they the tortured screams the residents? The arguments and shouts are inaudible during which some of the urgent, taunting electronic methods of Genocide Organ pop through. Murky abstracted sound eventually builds clear pictures. The albums description reads like Science Fiction made from present day reality. It could easily be the tower blocks in Blade Runner, Judge Dread or today.

Death radiates through hums and drones, I don’t know what the vocals say a lot of the time, but they constantly signify pain and despair. The dialogue of My Soul is Dead breaks this as the beats clearly draw a picture of the desolation of empty dwellings. Whose Soul is Dead; resident or building?

The second side of the album seems to pull back into itself further allowing for foreground sounds and vocals to create a wider space and deeper sense of desolation. Vocals and loops seem more excited than the previous side which seems to suggest a rise from the desolation, or an alternate state of being in what already is. There are more ambient qualities, which make side 2 simultaneously abstracted and direct. Pulsations and radiating sounds shift the listener into the different stages of each soundtrack which serve as a platform for lengthy dialogues backed by minimal collages of sound. Things occasionally get busier, only to break it down into bleaker acts of despair. The vocals sound as if they are broadcasted into enforced emptiness, is it a voice too late, has this society already failed too far down the line? ‘Clear sight on no man’s land’ certainly tries to reach out, kicking off until it dies into an ending.

Good bleak electronics, reviewed in my coldest room for full effect. This album does mash up genres and sounds to exist in its’ own muddy threatening territory. Great work.