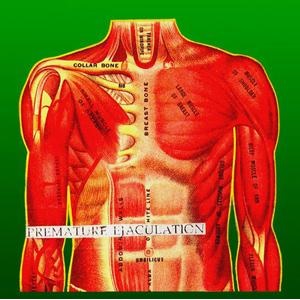 Dead Whorse Riddles is a compilation of Premature Ejaculation material originally intended for release through the first Malaise Music label run my Erik Christides. Sadly it was never released.  The music has been remastered by Benjamin Siebert and Artwork by Scottie. This is the ninth cdr of the series containing tracks previously released on the Anaesthesia and Descent as well as 4 previously unreleased tracks.

The Nature of Pain opens the album rumbling and shuffling menacingly. Pitches of feedback enter and build to almost vocal symphonics; it’s quite a unique instrumental for PE as music box noise also really adds that early 20th century avant-garde quality to the Nature of the track. A vocal dialogue brings things to an end.  Chuck Collison’s involvement is evident here because as I’ve mentioned he was pivotal to the cleaning up and sharpening of the Premature Ejaculation sound, I can never understate his importance enough.

Partial and Complete echoes with electronic low level power noises and loop rhythms. Inaudible vocal samples enter and then leave periodically while noises are injected and rejected. Red now a Premature Ejaculation classic pulsates through while dialogue accompanies it and rockets off into inaudible hyperspace where the vocal becomes a roar.  The pulsations loose their rhythm and noises break into the track.  Red in an updated manner tidily tortures the listener like the PE of early years. Atrophy layers more sampled dialogue over pulsations far more politely than Red; backed by keyboard drones rising in intensity with the sampled dialogue. Fistula in Ano combines an aggressive loop rhythm pulsating violently to further dialogue with interruptions of alarming noise and everything finally slowing down into a collapse. Untitled revels in inaudible vocal ambience that sounds as if it is being played in the wrong direction, sounds are overlaid to confuse and disorientate the listener. Night sounds as if from a field recording take over shifting the track into an entirely different context. Taking Good Care of Your Fear beats things back to Fistula methods and sounding like a timed, repeated, crash shooting. A guitar riff underlies the track, bringing instrumentation subtly back into the PE mix. The Most Astounding Living Monstrosity is like a violent and distorted cousin of Kraftwerk’s autobahn and Transillumination is a nauseous, spiralling dream assault that shoots out bursts of Heltir static.

Disc two is punctuated by three excerpts from the previous Malaise disc Descent and one Anesthesia track Salvation, Deliverance, Prayer for the sick which is very electronic in comparison compared to the Descent excerpts and builds up an intense nauseous density of drones, vocal samples and frequent differing noises. An Untitled passage begins with church organ like keyboard drones (not too unlike the later work of Paris Sadonis) builds to a symphony of frequencies that simultaneously harmonise well and work against each other to peak to a heady delirium.  Further Descents slow things down keeping the ambient darkness at a low simmering point and in its’ second excerpt allows things to rise. The first of the final two nine and a half minute Untitled passages bring instrumentation and field recording together backed by pulsating drones. What sounds like string instruments within bring an added dimension previously unseen in PE, it’s not as abstracted as previous strings in their discography just very considered and beautiful, but never again expanded on. This simultaneously ties together all the methods used in the different tracks on the album and treads newer territory.  The second passage of Untitled feels more electronic, tortured and groaning very similar to the work of the Anesthesia tracks presented within.

Dead Whorse Riddles serves as a good compilation of selected aspects of the mature sound of Premature Ejaculation. It highlights a more complex range of atmospheres and techniques. It throws up a lot of surprises and is a celebration of Premature Ejaculation in full stride at the height of their powers, a height that would continue to Rise right up until the finale Wound of Exit.