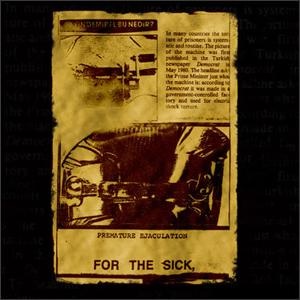 Attempts at 7 appears to date around the same time as 6, 1984 -86. The Turkish torture device used in the original artwork indicates immediately where 7 may take us, or threatens to take us. This I assume is a Rozz working alone as Premature Ejaculation; the sound is not as expansive through the detailed studio attention PE received when Chuck Collison was involved. Yet it is important as a PE release for several reasons.

The album opens with the last few seconds of some instrumental sounds that break into blasts of chicken noise before a conversation takes over. The conversation recording is also typical of the technique used in 6. However this is broken by further 6 reference of a militaristic, groaning, strained loop to a beat that is caught within the cycle for a good period of time.  This stops and then restarts to move on to recorded grinding sounds are put through a tunnel effect and turned into noise. This is a development on the techniques used on the album Rise and its Hoover blasts.

A nightmarish carousel loop begins; this is where there is the biggest development in PEs overall sound. It’s not just the combinations of noise that are effective throughout, but the move from this being just a soundscape with moments of clarity to a simple yet consistently effective ambient nightmare. This is PE’s experimentation really beginning to work form into effective Dark Ambient territory that they would later become leaders of. Noises then seem to be played backwards with random blasts of grinding noises over the top; the effect provides a successful dark atmosphere that is consuming and sporadically violent.  The use of loop and sample is far more effective on Attempts at 7 overall.

Attempts at 7 effectively uses bursts of everyday sound to function as effective noise or atmospheres upon which to use other sounds. There is humour through the variations in how far Rozz chose to remove the samples from their sources. Sometimes there is no doubt he was recording a creaky hinge or a power tool. At other times he has great success in removing the sound from its source and totally recontextualising it. This does follow on from 6, but is far less aggressive, 7 steps back to offer a journey though an elaborate ominous darkness.