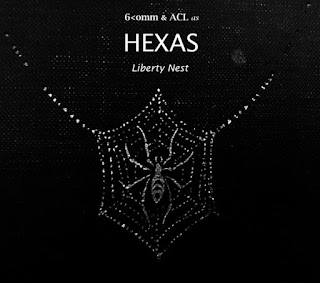 There has been a hive of activity in the 6<omm and ANTIchildLEAGUE camps in the last 2 years. The most recent is their new joint project Hexas, the fruits of which are the debut album Liberty Nest. Hexas introduce themselves with an ugly self-titled jolt of tense industrial sound. Gaya Donadio’s vocals are warped beyond belief, spewing masses of aggression and rage. Other vocal patterns are layered to back up and create new layers of sounds to compliment this warped passage of nausea. Leagas’ percussion is layered and complexed as noise pierces the proceedings.

The warped theme continues, things simmer down on Helborn as Donadio’s insane narrative leads us through the chaos.  The instrumental Art demands War takes the rhythm factor to the forefront with warped keyboards following the vocal samples. As the album progresses, it temporarily slips away from warped distortion into slower ambient, atmospheric passages of sound. Blasts of noise are tied into this to allow Gaya’s vocal to interrupt and break the dreamlike sonics and shift things back into an explosivnightmare. Donadio’s vocal duets with Legas on the album’s finale ‘Me and I’ building to Liberty Nest’s climatic end.

The album blends fragments of the Power Electronics extremity of ANtIchildLEAGUE and the percussive complexity of 6<omm. There are continuous warped sound elements that flow through the entire album and tie all the tracks together. This is a strong album; the songs are good and seem to have been cut down to deliver the very best of both artists. Legas’ percussion work is impressive and shifts away from the standard beats that populate many noise albums of late; Donadio’s obnoxious ACL persona splatters over everything throughout the album. Short bursts both projects to blend together and we truly have Hexas, which is beginning to take shape.

Donadio’s mojo is her willingness to take her forcibly direct vocal noise to the depths of abstracted ugliness. Her persona doesn’t menace, it attacks. Her vocal is as much of a noise as anything to come from a distortion box. Leagas’ contrasting vocal and his usual expansive musical scope expands the album’s horizons massively. Both styles are very distinct within the album, where will it go? 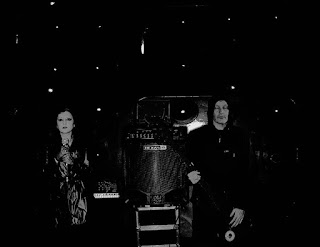