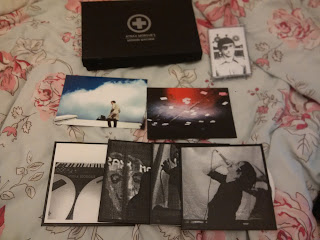 Mörder Machine was one of several Marco Corbelli side projects during the duration of his Atrax Morgue project. The Mörder Machine name was used twice in 1998 for two albums that were originally released on Corbelli’s own Slaughter Productions label. The first album was DeathShow and the sequel was Happy BirthDeath and they are the basis of this Old Europa Cafe box set, along with two unreleased recordings on cd and cassette. The box also comes with two postcards and a DVD containing four live Atrax Morgue performances that span a period of 8 years.

Happy BirthDeath opens in a Purgatory of Dark Ambient fog which is cut into by rude electronics as Corbelli chants in the background like a threatening presence. Is Corbelli suggesting he is The Living Dead?  The album hastily intensifies and descends into Deathly Power Electronics by ‘Night is Coming. Forever’ as Corbelli’s vocals are doubled and dragged across the beats and harsh frequencies; imagine the soundtrack to the ritual scenes in Eyes Wide Shut, but made for a wilful execution.

Corbelli simultaneously embraces repetition and improvisation on ‘Hell is Here’ and ‘Lorna Green’ which I believe is about the pornographic actress of the same name who appeared in several movies in the early 80s.  It’s worth noting that the original release had a calendar with his birthday circled next to a death symbol along with an image of Corbelli as an infant. Lorna Green’s time as an actress spanned 81-83, what personal significance does she hold? The back ground samples her films as a synthesiser sound oscillates ominously. With each track, the sounds pulsate to create a slow death with all its horror amplified; Death Industrial personified.  Another addition to the original release was an illustration suggesting the best way in which to hang yourself; this release really isn’t for the faint hearted.

The suffocating sequel DeathShow pulsates a fractured digital beat on ‘I’m So’, it descends into a dark ambient nightmare as Corbelli’s infected vocals radiate fear and anxiety. The layering progresses on ‘What’s A Human?’ as vocals combine with echoing chants, beats build to intensity. Sharp, Infected synthesizers then punctuate the vocal abstractions.
Deathshow disintegrates as it progresses, rhythms distort, vocals gain more prominence, whilst the electrics sharpen into Power Electronics and get uglier.  This is impressively brought to fruition in ‘I’m So – Reprise’ and ‘Deathshow’ the electronics are deathly and threatening. The sounds flit between wall like rumble and Death-hum to eventually combine as Corbelli’s vocal retch violently across everything to express his disgust and desire to become one with his music killing sounds.

Deathshow builds up to splattering pulsations that assert themselves massively. Sounds form rhythms that dominate and step back to allow other sounds in to take the lead – Corbelli is in control, this is no release of anxiety or depression, just an intense journey through the mind of Corbelli at a specific point in time. ‘Terrortory’ winds things down for the entrance of lengthy nauseous repetition of ‘Music for Dead Brains’ to kill the album off.
Each Mörder Machine release is a sick soundtrack to Birth and Death in which Corbelli could be seen as the murderer narrating his actions and the eventual arrival of Death, someone fantasizing their own end or life murdering life?  It’s difficult to say if the two releases combine to form the duration of a life-span or its slow death.

The live DVD contains footage of four entire shows over 8 years, the first from 1995 is just Corbelli behind keyboards and effects making noise as cut – up, graphic videos of death, surgery, serial killers and all manner of sickness are projected behind him. Fast Forward 3 years, Corbelli is beginning to become an imposing stage presence donning a long black leather trench coat and sunglasses. Vocals are now more prominent in his work as he begins to evolve away from behind the keyboards into an imposing frontman. The flickering video quality with its sudden jumps and rolls gives the performance a ghostly quality. The following 1998 performance recorded only a few months later shows Corbelli as a more confident frontman switching with ease from his keyboard set-up to prowling the stage. His identity is now really starting to become his own, visual influences are being shed. By 2003, the act is at full maturity, he’s using a wider range of vocal sounds, he looks odd and is totally in command - perfect. The DVD is as excellent due to the amount of shows on there and how they chart the development of Atrax Morgue as a live entity.

The unreleased reals were discovered by Corbelli’s friend Davide Tozzoli after his passing. They are rightly described as; ‘his last recordings, a cold and uncompromising analogue testament’. The recordings return to primitive noise of Maurizio Bianchi (with whom Corbelli collaborated) totally pure and futuristic in a retro way. A cold aggression that is refreshing and impressive through its simplicity, relentlessness and purity. The Tape (Reel II) is of the same analogue simplicity yet more aggressive. Both raise interesting questions, was Corbelli planning to regress the Atrax Morgue sound as a platform to further remove himself from the Death Industrial/Power Electronics sound he’d perfected; a regression before progression strategy?

Anything Corbelli did has become insanely collectable, each release a fetish object with some reissued and repackaged in lavish box sets like this. As his legend grows, I ask myself who was he really? Urban legend suggests plenty of things. Images show him cross dressing, posing with knives- constantly toying with Death. I find myself impressed with his cross-dressing bravado, his prolific output and hard-work. When listening to his work it is hard to avoid being infected by him and getting stuck in cycles of obsessive thought. How do you avoid these things in the present day when listening to anything by Atrax Morgue? But do I want to avoid these things? Nope. 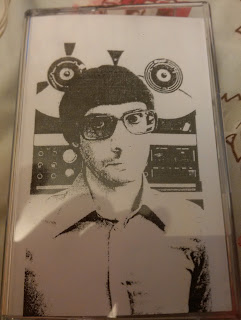