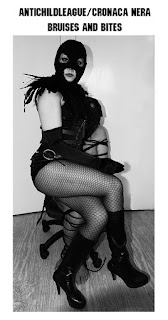 Cronaca Nera and ANTIchildLEAGUE both released their first recordings back in 2001 despite each being active prior to this. However, Cronaca recently returned in 2015 after a 13-year absence. Donadio has been active since around 1997 first with solo work appearing on the Elegy 2 and Notre Dame compilations prior to ACL.  For Bruises and Bites, Cronaca created the sounds on all the tracks and Donadio did the vocal work.

After the insane areas ACL’s 2016 album Holy Ghost reached with its’ vocal insanity, increasingly experimental and dubbed out sound-scapes, this pushes a rabid return to the intense rage of the earliest recording by ACL - Hell-worm. This was also evident on the infected sonic-tantrum that was 2016’s Holy Spirit released on the Obsessive Fundamental Realism label. Vocals form a mass of rage that surrounds the waves of distortion that rain from Cronaca Nera’s violent pulsations and Death Synths. This amasses to spread panicked sonic filth and perversion throughout the album.

The backing noise can be particularly choppy and violent, cutting into the massive sounds of the synthesizers. Gaya’s vocals screech, growl and order everyone and everything around. The cold surrounding noise switches rapidly between clinical, splintered and explosive. The explosiveness builds to controlled walls of distortion on Carnal Supremacy as Donadio loses her shit big-time. Selective walls also pop up throughout whilst Donadio rudely interrupts, disrupting the wall’s attempt to build and grow as a wall, only allowing for a whirlwind of anarchic noise.

As a joint recording this is successful, both parties complement each other perfectly. Donadio presents herself as the as the deliverer and recipient of torture in each song’s scenario, yet the dominant persona is the most prevalent side to Donadio throughout Bruises and Bites. Cronaca Nera provide intelligent varied noise that is exceptionally cohesive with the vocals. They deliver rich contrasts in sound that stop Bruises and Bites becoming disinteresting or too samey. This is a strictly limited recording that needs more work together between the two artists to see their combined, abusive sickness develop even further. But if not, it is still an impressive addition to the discographies of both artists. Wanting and waiting for more.