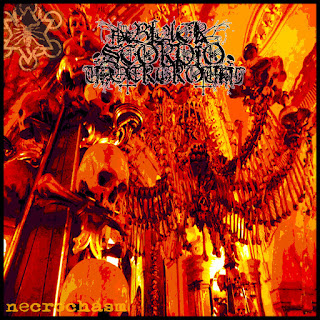 The Black Scorpio Underground has been active since 2005 and is the main project of Joe Truck Kasher. The project’s first release was ‘Attica’ in 2009, since then there have been around 15 releases, including some impressive split releases with The Haters, Vomit Arsonist and Werewolf Jerusalem.

The completely improvised Necrochasm makes good use of tortured samples and electronic pulsations a lot of songs intensify without exploding or erupting. It is themed around hatred, anger and darkness. In part, there are sounds derived from Black Metal, creating storms of noise. Long passages of murky ambience dominate the album, as if stuck in bleak purgatory; fogging everything over, ready to be broken up again.

Sounds that resonates bleak nightmares is built via samples on Garden of Mutilated Saints; electronic hellish ambience, low level drones, hidden melody and static hiss. Sometimes they all work together, at other times they are introduced to cut into the sound and break its continuity. Necrochasm uses silence as a weapon for long periods of time to begin tracks or strike them dead. Gunshots are repeated on Mortuum until they become a rhythm; a beat made from the violence of life. Painful drones coupled with humming feedback surround the rhythm until field recordings and electrical static expand everything to higher levels of bleakness. Kasher uses cold synths, sampled suffering and deep drones that are cuts of sharp electronics.

Necrochasm partly lurks in a foggier Blackened Dark ambient territory. Compared to their live performance this is a lot more layered and complexed. Sometimes I wanted more sonic violence from BSU, I was awaiting bigger eruptions like those on their split with Werewolf Jerusalem. It seems the project’s scope on this release is quieter; allowing for more intricacies and exciting accidents to happen and grow within the sound. It’s becoming apparent they are making rapid moves to operate in their own sonic territory. Only time will show the directions that The Black Scorpio Underground is taking as it begins to reach maturity.