Bloody Head is a new Nottingham based band made of heads from different bands linked to the local 593 collective; Moloch, Dead in the Woods, Nadir etc... I bought this as I was initially attracted to the Jerry Price artwork from the cassette that a friend had shared out on a Facebook post. The tracks are of a far more dirtier nature compared to where the band members come from. Most of the band members said bands fester in the bog of low end dirge, but this farts away from a completely different shit pit.

The sound is initially rooted in the same place as early Melvins, My War era Black Flag, or Flipper, but takes off to somewhere into its 'own territory. The vocals are spewed out in a desperate, pissed off manner. A primal rhythm section, excellent choppy riffs compliment this. Where this demo really delivers is that it achieves total clarity through its despairing, desperate dirge. The tracks vary well and avoid sounding too similar to each other.

Like the Nadir demo the emotional commitment from the vocals is really strong (different vocalist I know, but this seems to be a Viral Age trademark) and similarly the vocals come from desperation and frustration. But by making this comparison I don't want this demo to go the way of the Nadir, I really want to see which directions Bloody Head progresses into as the demo offers many possibilities. It would be great to hear what the right producer could do on an album. Overall this is an excellent start and a welcome addition to the Nottingham Hardcore scene. 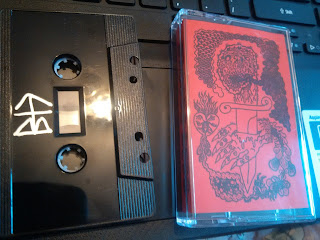