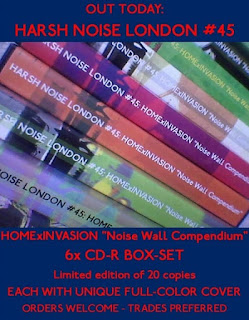 Once this blog got truly focussed in theme, the pleasurable aspects of doing it emerged, they are reviewing what I buy, free stuff and most of all discovering new present-day acts – the Facebook side of it is great for that. The passion for new acts put an end to me doing the Greatest Hits reviews, e.g. reviewing bigger more established names to get more likes and views (zzzz). I honestly prefer discovering new acts that are shifting the parameters of what constitutes noise now. One of those artists I discovered is HOMExINVASION, a young British HNW project that has released his own recordings physically and online over recent years. There have been recent releases on UK based labels including Harsh Noise London and Lost Notes Media. One of the key themes of the project seems to point towards a timeless darker side of modern Britain, others include the darker side of obsession. As these themes resonate, there is almost a Tales of the Unexpected feel to some of the releases.

Noise Wall Compendium on Harsh Noise London is the project’s largest release to date spreading across six discs, each has its own unique cover.

The first disc is two tracks, Razorblade Fascination I & II. The unique sense of Bleak Britain that surrounds the project is immediately apparent in the consistent, low rumble of the sound. The sound is pure Northampton bleakness, no warmth, no light. The blade is a frequent cast member to the work of HOMExINVASION, having appeared on 2019’s Thousands of Trivial Wounds. As the sound drags itself along, I question is this the loneliness of isolation and comfort through blades sound tracked or violence? The second Razorblade fascination is a sharper affair with a more energetic rumble, this has a higher level of aggression to its’ sound.  There is a clear crackle that moves with the lower rumble to give a layered feel to the sound.

There is a sharper crackle on the second disc, this also has a more abrasive drag that pulls through the sound as if to create a shift in layers at times. There is also an energy to the back rumble that seems to spread outwards and affect the other aspects of the sound.  The second work has a richer crackle with more hiss woven into it, the back roar has a sharp intensity as the crackle bounces on the surface. The Untitled titling of both passages of sound does work and give an appropriate emptiness to the work. Emptiness isn’t easy to do as it can come across as very generic, this is the first example of HOMExINVASION doing nothingness well.

The third set of walls on disc three reflect the obsession with various aspects of a female nature, in this case two pieces based on college girl knife fights. This also relates to the violent underbelly of society, with knife crime amongst teens, particularly in gang rivalry a constant problem;  Crime frequently appears in the project’s body of work. The wall in the first knife fight has a deep bass roar and aggressive sharp crackle that resonates with the deeper sounds violently. The second wall is more aggravated with a mono like roar and little distortion, here the mono hum is the chaos, there is less distortion, only the gradual shift and rough edges of the bass.

The first wall of the fourth disc combines a deep bass roar and wall of distortion layered close to it. The subject here is Grey Sky worship 1 & 2. Grey Sky makes a frequent backdrop or in its’ entirety in many of the themes of HOMExINVASION often on the covers of his work. The bass seems pushed to the edge as if at breaking point, but the distortion acts as a protection, two become one. This combination allows the sound to step up a few levels, never breaking up. The second Grey Sky Worship is more broken and splatters its song, it is a lot looser than the first. This loosens more to intensify its’ roar.

Disc 5 has a double edge, it truly explores emptiness, with 2 studies of static purity. This goes to the core of the genre by presenting two passages of low-level hiss, the emptiness becomes the noise. This stripped back approach throws me and impresses me a lot. Both works differ, with the second having a lower hiss that does fill the space slightly more, but still little. This impressive disc is the rouge card of the pack.

The theme of emptiness continues the sixth disc, this is two studies of Reclusion. This may possibly be more tied in with the personal aspect of the project. This has a sound that has a combination of incredibly low roar and very low hiss, silence also partially occupies the sound here. The second Reclusion has a slight increase in sound producing a restrained rumble to create a wall, this Reclusion stammers and struggles with its’ sound as if unwilling or unable to communicate, this is conceptually rock-solid work.

A range of obsessions are explored, most are frequent themes in the work of HOMExINVASION. Here we are given the wider conceptual being of the project. At two to three years old this is a brave move to spread all aspects of the work across 6 discs so successfully. At times, the work is very innovative, all of it is strong and it makes for an excellent set of discs. I am very impressed with this body of work; it is available through Harsh Noise London.