4.  Slitting the Throat of the World. 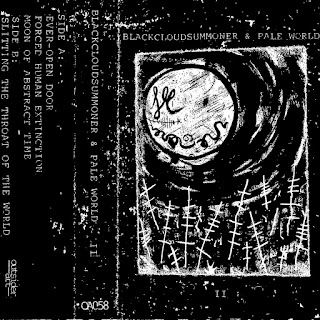 II is the second collaboration between Pale World and Blackcloudsummoner, all tracks are collaborative. Ever-Open Door sounds like a soundtrack to another dimension as feedback and echoing clang metal go off. This goes on for a while, creating horrid mental landscapes. Deep drones seem to overwhelm everything as their deep rumble resonates around everything. As this really kicks in the sound is massive with the lead sounds allowed space so that they really create a rich, overlaid atmosphere. As the Ever-Open Door falls back into the distance, what sound like hymns being sung finish everything off.

Forced Human Extinction demonstrates aggressive electronics to produce a ruthless sound. Sounds seem to layer on top of each other when you feel it can’t possibly expand further. Screaming noises are woven into the sonic texture; this is more hellish than the opener. The electronics are very disciplined and effective until piano playing interrupts as if to cut off the chaos.

Moon of Abstract Time demonstrates a determination to out do all that came before it on this tape. The nasty electronics reek of depravation and suffering as noises scream like voices continually. As the track progresses the deep churning sounds stay the same, but the over laying noise seems to get increasingly demented as it warps out. I like the unique nastiness of this work as it erodes itself to an end.

The demented qualities of the sound work to maximum effect as a warped Slitting the Throat of the World drags itself along. As the electronics gain speed the sound grows and intensifies massively into another huge display of negativity. The smaller sounds that exist within the chaos interest me, they are quirky and odd like a lot of Blackcloudsummoner and Pale World noises often are. This is the longest track between the two artists and the twisted language between them really builds and moves throughout.

I am pleased Outsider Art is picking up on a lot of odd, warped variations of Power Electronics like this that are emerging, as releases like this really are amongst the best new work out there today.